This easy riverside walk takes you from Marlow to Hurley along the Thames Path. The route runs for a distance of just over 2 miles on a flat waymarked path. As such it's perfect for a pleasant afternoon stroll.
The walk starts on Marlow Bridge and heads east past the delightful Higginson Park which is worth a small detour. The riverside park is a popular local attraction with its pretty gardens and maze.
The path continues to Temple Lock and Temple Lock Island. It's a noteworthy and scenic spot on the river, having first built by the Thames Navigation Commissioners in 1773. Shortly after passing the lock you come to Hurley Lock, another significant and picturesque lock on the Thames. Here the river splits into a number of channels with several weirs between wooded islands.
Just to the south of the lock you can stroll into the small village of Hurley. You'll pass the historic remains of Hurley Priory, a former Benedictine priory which sits on the banks of the river. The long narrow nave of the priory church survives and is used as the Hurley parish church. It has mainly Norman windows and doorways. Also of note here is the Olde Bell Inn which dates from 1135. It is claimed to be the oldest hotel in the UK, and one of the oldest hotels in the world. The hotel is said to contain a secret tunnel leading to the village priory, which was used by John Lovelace, who was involved in the Glorious Revolution to overthrow King James II in the 17th century. The hotel was also used as a meeting point for Winston Churchill and Dwight D. Eisenhower during World War II.  It's well worth exploring the whole site as other features include a kitchen garden, wildflower garden and a 16th century Tithe Barn. The inn is located close to Pinewood Studios and over the years, has seen a number of movie-star guests, including Mae West, Greta Garbo, Cary Grant, Errol Flynn, Elizabeth Taylor and Richard Burton.
After exploring Hurley you can return to Marlow the same way or turn it into a circular walk by heading north from Temple lock into the countryside. You could then pick up Lower Pound Lane and follow it back to Marlow, via Higginson Park.
To extend the walk you could continue onto Henley on our Marlow to Henley Walk.

The Riverside Restaurant in Marlow is a lovely location for some refreshments. There's a fine outdoor terrace which is ideal for warmer days. You can find it right next to Marlow Bridge at a postcode of SL7 1RG for your sat navs.
The Two Brewers is also located near the river in Marlow. The 18th century pub does great food and also has a nice beer garden. You can find it on St. Peter Street at postcode SL7 1NQ.

Higginson Park in Marlow is a nice place to visit in the town. The popular park attracts 1,000,000 visitors a year and includes riverside views and access to open countryside. There are also many fine trees and large expanses of lawn with formal flowerbeds and a brick in grass maze. It's another good option for refreshments with a nice cafe. You can find the park on the western fringes of the town, next to the river.

Marlow bridge and church. The bridge was designed by William Tierney Clark, after his successful Hammersmith Bridge was much admired. It was opened in 1832. Rather than replacing it in the 1920's the ironwork was replaced with steel and the towers restored. All Saints Church was built on the site of an earlier one and completed in 1835. The rebuilt spire was restored in 1990-93. 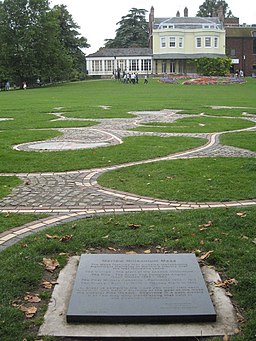 Millennium maze in Higginson Park. The maze is a multi-coloured brick path, laid in the grass and covering an area of about 22 metres diameter and was designed by famous maze-maker Adrian Fisher. At various places in the design, decorative mosaics are used to portray particular images of the history and heritage of Marlow and its significance for the millennium. It was officially opened on 28 October 2000. 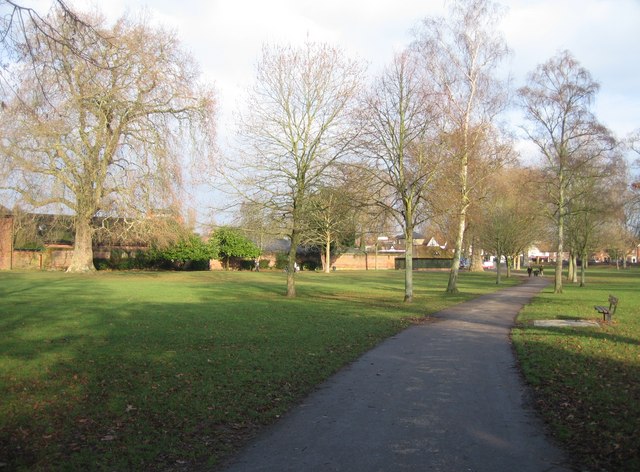 Path through Higginson park. In the early 1920s Higginson Park was threatened with a plan to develop riverside housing. A group of local men started a campaign to raise funds to purchase the land and save it from development. In 1926 the land was purchased and then presented to General Sir George Higginson a veteran of the Crimean War. He promptly gave the park to the town. 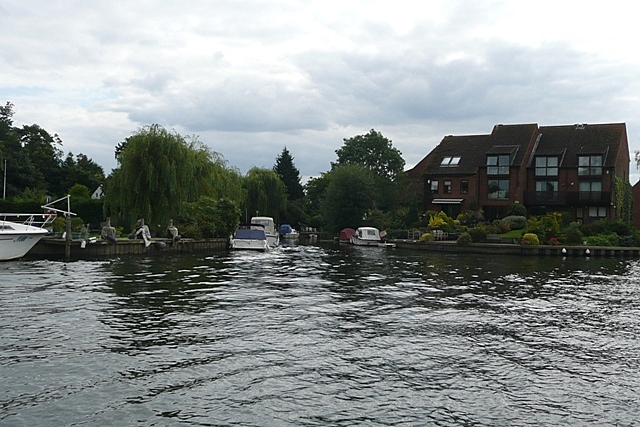 Temple Lock Island. The apartments on the right are on the lock island. One of the weir streams comes back in below the lock in the centre of the picture. To the left is the "mainland".

Temple Lock keepers hut. All the Thames locks have a hut like these where the keepers check licences and record the passage of boats and operation of the lock. Many sell a few items as well, such as the postcards here, to the people rushing by. However, it was previously a more important staging post, when travel was more leisurely and users of the river were invited to "change here for bath lunch tiffin dinner and supper" all (except the first) being distinct and separate meals. 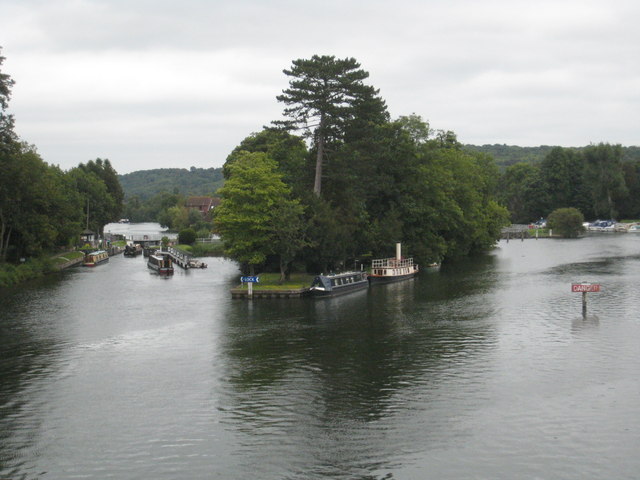 Hurley Lock. Pleasure cruisers heading downstream on a warm Thames-side weekend. The lock gardens are immaculately maintained and are appreciated by many users of the Thames Path which runs past the lock.