This circular walk follows the Otterburn Village Trail around this Northumberland village. It runs for just over 2 miles with nice views of the surrounding countryside on the way.
The walk starts in the village and follows the trail north along the waters of the pretty Otter Burn. This takes you up to Otterburn Hall, a country house situated in 500 acres (200 ha) of deer park and woodland. It's an attractive building, Grade-II listed with English Heritage, and rated with four-stars by the Architectural Association School of Architecture.
From the hall you head east and then south to follow the trail through Girsonfield and back into the village.
Other interesting sites near the village include the site of the Battle of Otterburn. The battle took place in 1388 as part of the continuing border skirmishes between the Scots and English. Percy's Cross which marks the battlefield can be found about a mile north west of the village. There is a public car park off the main road and a short footpath to the cross.

Head to the special Otterburn Castle for some post walk refreshments. This castle hotel, restaurant and bar combines contemporary state-of-the-art features whilst retaining the original 9th century traditional charm. The Grade II listed castle has an interesting history dating back to the 9th century. It's Pele Tower also features in accounts of the Battle of Otterburn mentioned previously.
The restaurant and bar area do great food with lovely views over the 32 acre estate of the castle. There's also a garden terrace to sit out in on warmer days. You can find the hotel at a postcode of NE19 1NS for your sat navs.

The village is located in the Northumberland National Park where there are many more great walking opportunites. You can follow different bridleways north from the village into the hills and countryside. If you head south east there's a nice path along the River Rede.
The Simonside Hills are located not far from the village. There's miles of trails here with interesting rock formations, rocky outcrops and some wonderful viewpoints. The expansive Harwood Forest is also near here and has umpteen woodland trails to follow.
Head a few miles south and you'll find some pleasant woodland and waterside walking around Colt Crag Reservoir and Sweethope Loughs. These pretty lakes are also a good spot for wildlife watching with various wildfowl visitors to look out for on the water.
To the north there's the popular Kielder Forest where you can visit the wildlife on the expansive Catcleugh Reservoir and see the delightful secluded waterfalls at Hindhope Linn.
Just to the east there's the neighbouring village of Elsdon. The attractive village is well worthy of exploration with an ancient church, a large village green, the remains of the old motte and bailey castle and a noteworthy Pele tower to see.
For more walking ideas in the area see the Northumberland National Park Walks page. 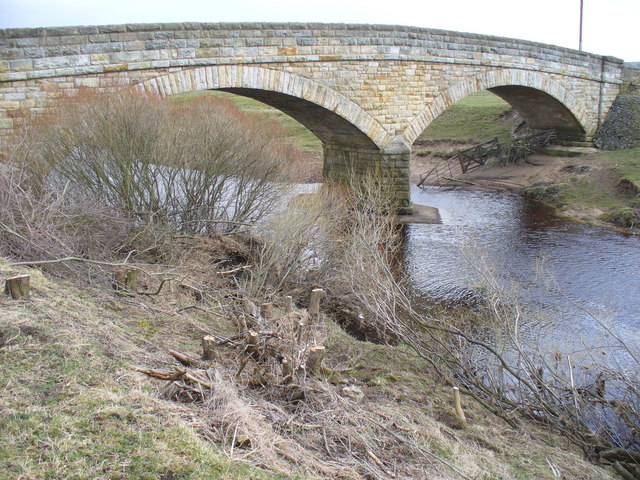 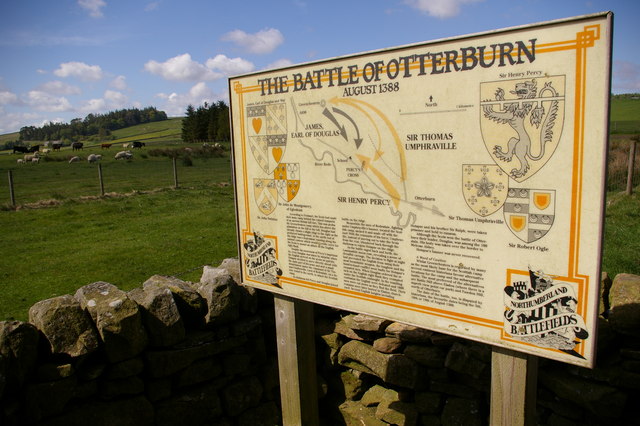 Battle of Otterburn 1388. Sign near the site of the battle

The Battle of Otterburn (Site of) AD August 1388. Just off the A696 to the north west of Otterburn.

Tenter Frames, Otterburn Mill, Northumberland. Washed cloth was hooked on to the Tenter Hooks, and the bottom row of hooks released to stretch the cloth as it dried in he sun and wind before further processing. These are believed to be the last remaining Tenter Frames in the world and these frames date back to the early eighteenth century. From this method of stretching the cloth the expression was created: 'To be on tenter hooks'. (Description copied from adjacent signage.)