This circular route on the Wiltshire Downs explores the area around the village of Aldbourne. It's a 12 mile route on broad tracks which is also suitable for cyclists. The tracks are waymarked with 'Ridgeway Circular Route'. There's lovely rolling countryside with great views and some moderate climbs. Look out for a wide variety of flora and fauna on the attractive chalk downland. Wildlife includes deer, hares and birds such as skylarks and meadow pipits. In the summer butterflies can be seen around the widlflowers growing on the hills.
The route starts in the village of Aldbourne, about 5 miles to the south east of Swindon and 6 miles north east of Marlborough. It's a pretty village with an interesting history and the medieval church of Saint Michael which overlooks the village green. There's also a number of attrative old sarsen stone cottages.
You leave the village climbing in a north westerly direction to Sugar Hill where there are four Bronze Age barrows. You then turn west towards Liddington Hill. Here you will find Liddington Castle, a late Bronze Age and early Iron Age hill fort. From the 900ft hill there are splendid views over the beautiful countryside of the North Wessex Downs.
From the hill you descend to the hamlet of Woodsend and the abandoned medieval village of Snap. The route then heads east, passing Upper Upham before returning to Aldbourne.

Just a few miles to the south of Aldbourne there's the worthy village of Chilton Foliat near Hungerford. It's a lovely place for a stroll with several pretty thatched cottages, wildlife rich marshland and nice views of the River Kennet which runs through the settlement. Near here you can also visit Littlecote House, another of the area's highlights. The house dates from the mid 16th century and is surrounded by beautiful parkland and gardens. There's also a wonderful ancient Roman mosaic and the opportunity to enjoy afternoon tea at the historic house which is now run as an hotel.
Ramsbury with its pleasant trails along the River Kennet can also be visited in this area.
For more walking ideas in the area see the Wiltshire Walks and the North Wessex Downs Walks pages.

The north end of The Green, Aldbourne, Marlborough

Bridleway from Aldbourne, Sugar Hill. A tumulus stands on top of the hill. 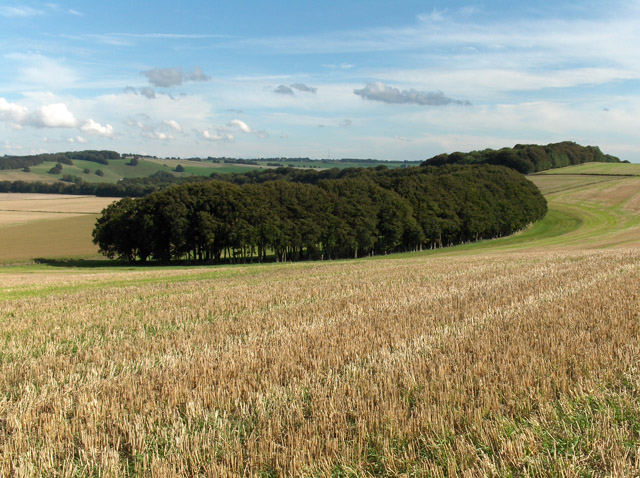 Half Moon trees. Named after its crescent shape, in contrast and out of proportion to The Moon. Located next to Sugar Hill.

Liddington Hill, south of Swindon. Hidden within the clump of trees on the skyline is a wartime relic in the form of a 'starfish' decoy control bunker. Nowadays, the clump has become an unofficial shrine to departed relatives. It occupies a commanding position overlooking Swindon a few kilometres to the north. 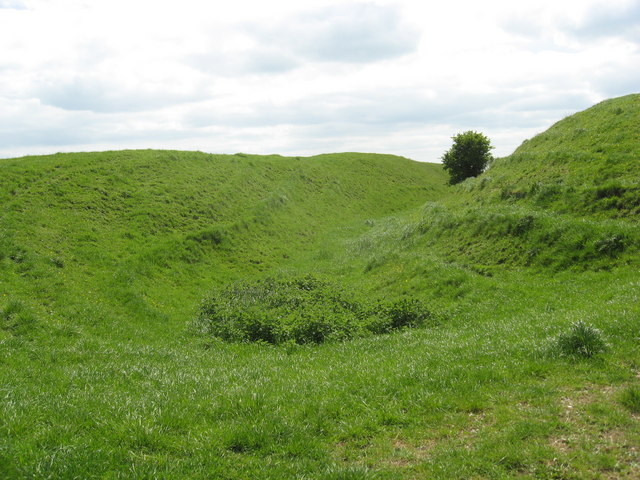 Ditch, Liddington Hill. Richard Jefferies writes feelingly about this in his autobiography, 'The Story of My Heart': Moving up the short sweet turf, at every step my heart seemed to obtain a wider horizon of feeling; with every inhalation of rich pure air, a deeper desire. The very light of the sun was whiter and more brilliant here. By the time I had reached the summit I had entirely forgotten the petty circumstances and the annoyances of existence. I felt myself , myself. There was an entrenchment on the summit, and going down into the fosse I walked around it slowly to recover breath. 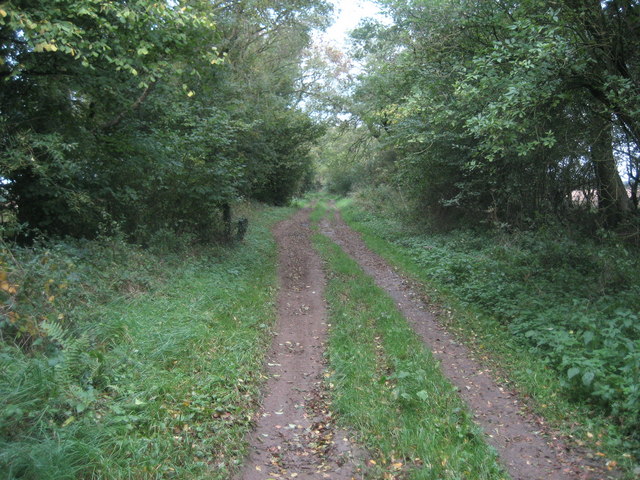