This circular walk runs from Woolacombe to Mortehoe via Morte Point. The route runs for about 4 miles using a cliff top path with some moderate climbs.
You start on the front in Woolacombe and heads north along the South West Coast Path to Morte Point. Here you will find a series of interesting rock formations and some lovely coastal views to Lundy Island.
Morte Point (literally meaning death-point) is notorious for being the site of many shipwrecks. Five ships were wrecked in the winter of 1852 alone. It's also a good place for spotting Atlantic grey seals in the waters below, so be sure to bring some binoculars.
The route continues east along Rockham Bay with wonderful views along the coast to the Bull Point lighthouse. At Rockham beach you turn south to follow a footpath inland to Mortehoe. The village has some pretty cottages and also includes The Mortehoe Heritage Centre, based in the Cart Linhay building. On the upper floor is a museum of the history of the most north-westerly tip of North Devon. The museum has displays about the local farming communities, the railway, and the numerous shipwrecks that occurred off the treacherous rocks around the nearby coast.
The village is a popular tourist destination so you'll find a number of high quality pubs where you can enjoy refreshments before continuing the walk. This Chichester Arms was the vicarage for a few centuries before becoming a pub-hotel in 1820.
After leaving the village you follow country lanes back to the coast path before returning to Woolacombe.
For an alternative route around the area try the Mortehoe Circular Walk which visits the nearby Bull Point Lighthouse. You could also try the popular Ilfracombe to Woolacombe Coastal Walk which heads east to the town where you can catch ferries to Lundy Island.

The Chichester Arms in Mortehoe is a pub of note, having originally been a 16th century vicarage. There's a good menu and a nice outdoor seating area to relax in after your walk. You can find it at postcode EX34 7DU.
The Smuggler's Rest (mentioned above) is another good option. It dates from the 1800s and also includes the delightful Miss Feas Cafe. Here you can soak up the summer sun in the lovely sheltered garden while enjoy a well earned snack. You can find the cafe in the village on North Morte Road at postcode EX34 7DR. 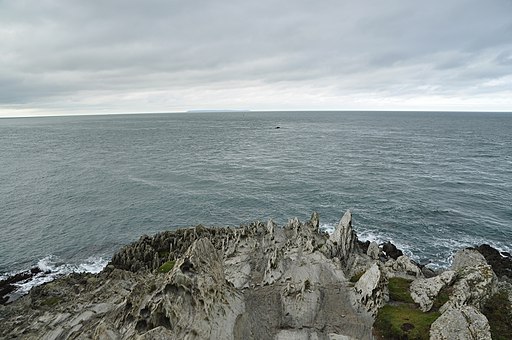 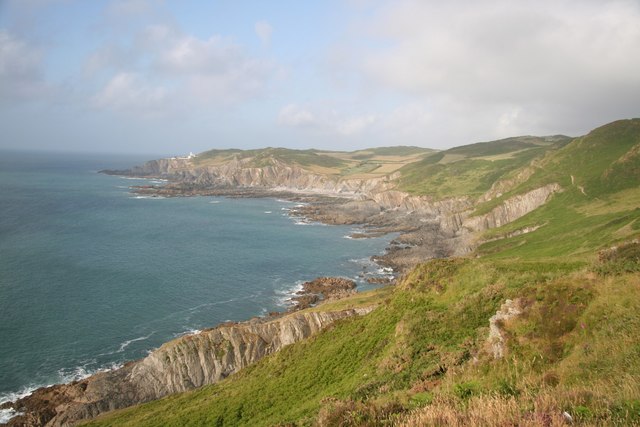 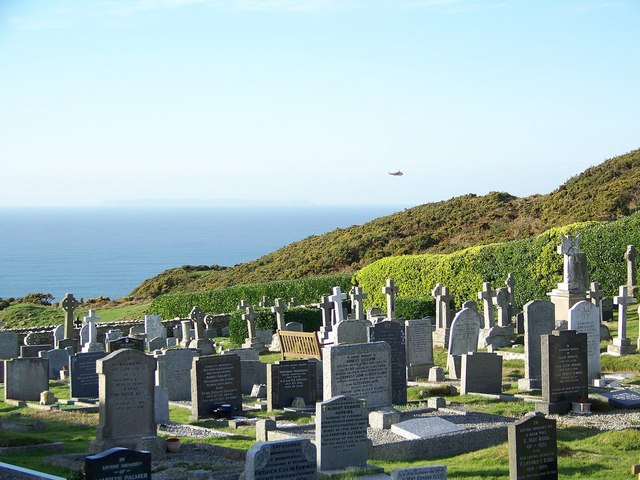 Cemetery, Mortehoe Looking out across the cemetery of St Mary's Church. The air-sea rescue helicopter in the distance and Lundy on the horizon