This walk takes you along the Ashlett Creek from Ashlett to Calshot Castle in Hampshire.
The walk starts in the village of Ashlett at the village quay. From here you can pick up a footpath heading south east along the creek to Fawley Power Station and the Calshot Marshes Nature Reserve. The reserve is a great place for birdwatching with large numbers of migratory and over-wintering waders and wildfowl. Look out for Wigeon, Teal, Ringed Plover, Grey Plover, Black-tailed Godwit, Redshank and Dunlin in this area.
After passing the reserve you turn the corner to reach Calshot Castle. This artillery fort constructed by Henry VIII on the Calshot Spit during the 16th century. You can explore the castle and Calshot Beach before returning to Ashlett on the same paths.
To continue your walking simply head south west along the coast to visit the lovely Lepe Country Park.This coastal park has lovely beach walks and views of the Isle of Wight over the Solent. 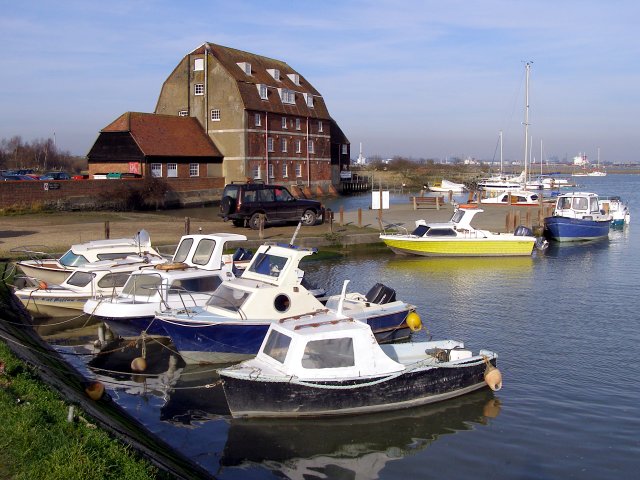 Victoria Quay and Ashlett Mill. Looking towards Ashlett Mill on the restored Victoria Quay. The mill is a three storey brick building with a tiled mansard roof, rebuilt in 1816. It is now home to the Ashlett Club, part of the Waterside Sports and Social Club.

Ponies south of ESSO sailing club, Ashlett Creek. These ponies are grazing the field on the edge of the saltmarsh at the creek. Beyond the animals is the fenced boat pound of the ESSO sailing club.

Submerged barge in saltmarsh, Ashlett Creek. Looking across Southampton Water from the shore near Ashlett. In the foreground an old barge wallows in the mud of the saltmarsh. Out in the shipping lane a Red Funnel ferry is making its way to Southampton from Cowes on the Isle of Wight.

Edge of Calshot Marshes. The bollards in the foreground are two of a series that stretch from the power station fence down to the shore. In the far distance is the Marine Terminal of the ESSO oil refinery.

Calshot Marshes nature reserve. Looking across Calshot Marshes from the path along the shore, towards the end of the spit (with the old hangars and coastguard tower). This is a typical salt marsh, formed in the lee of Calshot Spit at the mouth of Southampton Water.

Sea wall, Calshot Castle. The castle, built 1539, is surrounded by a moat (seen here on the left) and separated from the Solent by the substantial wall on which the photographer is standing.