This incredible 600 mile walk follows the coast from Minehead in Somerset, through Devon and Cornwall and onto the finish point at Poole in Dorset. You will pass some of the most spectacular scenery in the country with beautiful beaches, stunning cliffs and a series of charming coastal villages just some of the highlights along the way.
Scroll to the bottom of the page to download the full gpx file for the whole route.

Head to the delightful Clavell’s Restaurant in the picture box village of Kimmeridge for refreshments on your walk. There's a fine menu and a nice outdoor seating area to relax in during the summer months. You can find the pub at postcode BH20 5PE.
The Cornish coast has some delightfully quaint old pubs to investiagte. The Jolly Sailor in Looe in Cornwall is a historic pub of some note. It was originally established in 1516 making it one of the oldest pubs in England. Affectionately known as 'the Jolly' by the locals, it has been a place of rest and recreation for seafarers and travellers alike for centuries. Inside the main beam in the pub was taken from a French ship of the line at the Battle of Trafalgar in 1805. The ship was captured and renamed The Indefatigable. When she was later broken up, the landlord of the time arranged for the beam to be installed in the main bar and it remains there to this day. The pub has been refurbished to a very high standard, making it one of the most pleasant, as well as the most characterful of places to drink or stay in the town. You can find the pub on Princes Square, Looe at postcode PL13 2EP.
In nearby Polperro the delightful Blue Peter Inn is another must see pub. Nestled between ancient smugglers cottages on the harbour and Fish Quay, just a few yards from the beach 'The Blue' (as it is affectionately known) is one of the quaintest pubs you may ever come across. The building is Grade I listed and dates all the way back to the 16th century. The award winning pub has a wonderfully cosy interior, a great menu and is also dog friendly. You can find it on Quay Road with a postcode of PL13 2QZ for your sat navs.
In Dorset at Osmington Mills you'll find the noteworthy Smuggler's Inn. Situated on the cliff tops of the South West Coast Path, just outside the village of Osmington, the Smugglers Inn is a traditional English pub with stunning views overlooking the Isle of Portland. The pub also has an interesting history having been the headquarters of the French smuggler Pierre Latour and one of the main landing places for smuggled goods in the 17th century. Notably the Inn was originally built in the 13th century, with its own brewery at the rear. There's a lovely large garden area which is perfect for relaxing in when the weather is fine. You can fine the pub right on the coast at a postcode of DT3 6HF for your sat navs.
The Cottage Team Rooms in Clovelly in North Devon is a nice choice. This delightful village tea shop is full of period charm. Outside, the sunny sheltered courtyard offers you spectacular views across Bideford Bay and the garden overflows with colourful cottage flowers and exotics. You can find the tea rooms on the High St with a postcode of EX39 5TE for your sat navs.
The Beach House Hotel at Cornwall's Widemouth Bay is a gem of a place, with great food and an outdoor seating area on the beach. It was listed in the top 20 beachside bars & restaurants in the UK in The Times (2018). There's seafood & spices, chargrilled steaks & skewers, little dishes & sweet treats. You can find the bar right on the beach at postcode EX23 0AW.
In Bude in north Cornwall there's lots of good options near the head of the canal. There's the delightful Barge Tea Rooms. Moored on Bude’s historic canal, The Barge provides a memorable dining experience, by offering customers a unique view of one of the most picturesque scenes in North Cornwall.
There's also The Brendon Arms right next to the canal. Bude's best known Inn, it has been owned and run by the Brendon family since 1872. It overlooks Bude's inner harbour and just 200 yards from the unique sea-lock and Summerleaze beach. There's also a lovely large beer garden where you can sit out on warmer days.
The Tinner Arms is a historic pub in Zennor near St Ives. It was built in 1271, meaning the pub has been at the heart of village life in Zennor for over 700 years. The pub was originally constructed to accommodate the masons who built the Norman St Senara’s Church. It has a charming olde worlde interior which is like stepping back in time. They do very good food and have a lovely large garden area to relax in on warmer days. You can find them at a postcode of TR26 3BY for your sat navs.
The area around the village is also worth exploring with the fine old church of St Senara to see. In the church you will find of only two remaining bench ends portrays the Mermaid of Zennor, depicted admiring herself in a mirror. You can see this on the "Mermaid Chair" which also has carvings of fish on the seat, and which is believed to be at least 600 years old. Also nearby is the Zennor Quoit. This historical site is located on a moor about a mile (1.6 km) east of the village. Here you will find a ruined megalithic burial chamber dating from 2500–1500 BC.
Near the delightful seaside village of Bigbury on Sea there's the Journey's End to consider. It's a historic pub of some note, dating all the way back to the 13th century. Inside there's a cosy interior with four fires and a lovely conservatory. Outside there's a large garden area for warmer days. They serve high quality food and can be found at Ringmore with a postcode of TQ7 4HL for your sat navs.

Cove Cottage, Porthgwarra. The dwelling in the centre of this photo is appropriately called Cove Cottage, as it sits above the cove at Porthgwarra. Just beyond it, to the right, is the top of the tunnel down to the beach at Porthgwarra cove. The headland beyond the cottage is Carn Scathe. The wooden fingerpost on the left points out the route of the southwest coast path.

Coast path around Bass Point. The building of Lloyd's signal station dominates this headland, the coast path winds its way around the point. The hottentot fig plant is invading the cliffs here,

Coastal lawn, Broad Ope. The coast to the east of Portland Bill is known as Broad Ope. This grassy lawn is on the clifftop between Butts Quarries and Cave Hole. The small building on the left is next to a small disused quarry. The land surface slopes gently downhill to the cliff edge, with the topsoil of the slope lying above the raised beach deposits. The coastal path follows the well-worn route across the grass.

Coast path approaching Blackstone Point from the west The coast path follows the cliff-top to Blackstone Point (the headland on the right). Just beyond is the old oil shale (blackstone) mining area of Clavell's Hard, then the path rises up to Rope Lake Head. St Aldhelm's Head can be seen in the far distance. 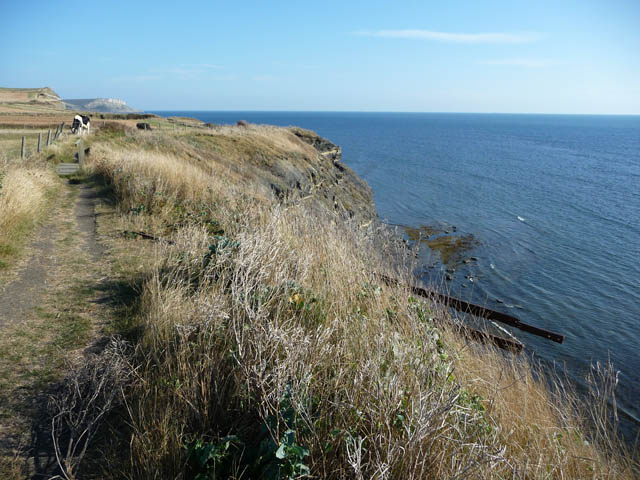 Remains of tramway near Clavell's Hard. A short section of the tramway that served bituminous shale workings on the cliffs in this area can be found protruding over the edge. 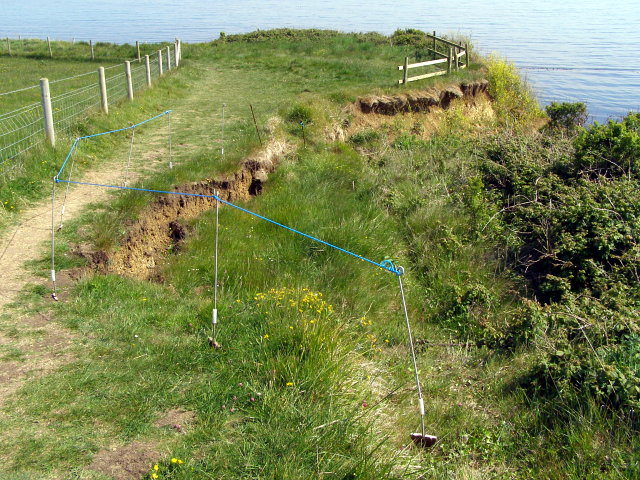 Slipping clifftop, Bran Point. The coast path from Osmington Mills to Ringstead follows the cliff-top, and this section has fairly recently slipped. It is possible to walk along the shore between Osmington Mills and Ringstead if tide and weather allows. The left turn up ahead is at Bran Point.

View from Emmetts Hill over Pier Bottom to St Aldhelm's Head. A steep sided dry valley separates the two high points. The coast path goes straight down and up; a diagonal path can be traced on the opposite hillside. In the 18th century there was a jetty at the bottom of the valley for the export of stone, hence the name.

Coast path east from Cuddle. The coast path leads along the crumbling cliff-top. Underfoot is the high ground of Cuddle. A seam of blackstone (oil shale) outcrops in the cliff below (off to the left) and on the left of this photo is a cutting that once carried the 1848 tramway of the Bituminous Shale Co. The tramway was connected to the workings north of D Plantation (off to the right), and from there it ran down towards a wooden pier that stood off the old sea-wall beside Maple Ledge in Kimmeridge Bay.