This popular walk takes you to the summit of this iconic Shropshire Hill.
You start at the car park at Lawrence Hill and follow good footpaths along the Shropshire Way to the 407 m (1,335 ft) summit.
Here you will find a large Iron Age hill fort and the Wrekin transmitting station beacon. There are also magnificent views over the beautiful Shropshire Hills AONB and no less than 17 counties of England. Other sights to take in from the summit include the Malvern Hills to the south, the neighbouring Shropshire summits of the Clee Hills, the wooded Wenlock Edge, the Long Mynd and the Berwyn Mountains of Wales. There are also fine views of the River Severn and the Severn Gorge, Coalbrookdale and Iron Bridge, birthplaces of the Industrial Revolution, are just downstream. There's also a handy toposcope detailing all the landmarks you can see. From the summit you descend to the south and then return to the Lawrence Hill car park via the forest paths in Wenlock Woods.
If you would like to continue your walk you could pick up the Shropshire Way and head towards the nearby River Severn where you can enjoy waterside walking along the Severn Way.
Just to the north east you will find The Ercall. This small hill is surrounded by lovely ancient woodland and 500 million year old rocks. The walk to the hill starts from the same car park.
The Wrekin Hill is close to both Wellington and Telford.

TF6 5AL - Please note: Postcode may be approximate for some rural locations

Head into the village of Little Wenlock after your walk for some well earned refreshments. The Huntsman Inn is a great option where you can soak up the sun in the secure outdoor terrace or watch village life pass by from the roadside seating area. There's a great menu including classic British dishes with an emphasis on fresh local produce. You can find the pub at postcode TF6 5BE.

The hill and surrounding woods are a great place for dog walking.

The hill includes an interesting Iron Age hill fort on the summit. It is thought the fort was built by the Cornovii tribe and was once their capital before the Romans moved them to nearby Wroxeter. The remains of the Roman City can be found to the west of the hill and are well worth a visit. Known as Viroconium Cornoviorum, it was the fourth largest city in Roman Britain, and is now gradually being excavated. Extensive remains of the city can still be seen today.
The Wellington Walk visits the Ercall and The Wrekin from the nearby town centre. The walk start from close to the bus station and train station making the area accessible by public transport. The town is well worth exploring with its historic market and the splendid Victorian house and garden at the National Trust's Sunnycroft to see. 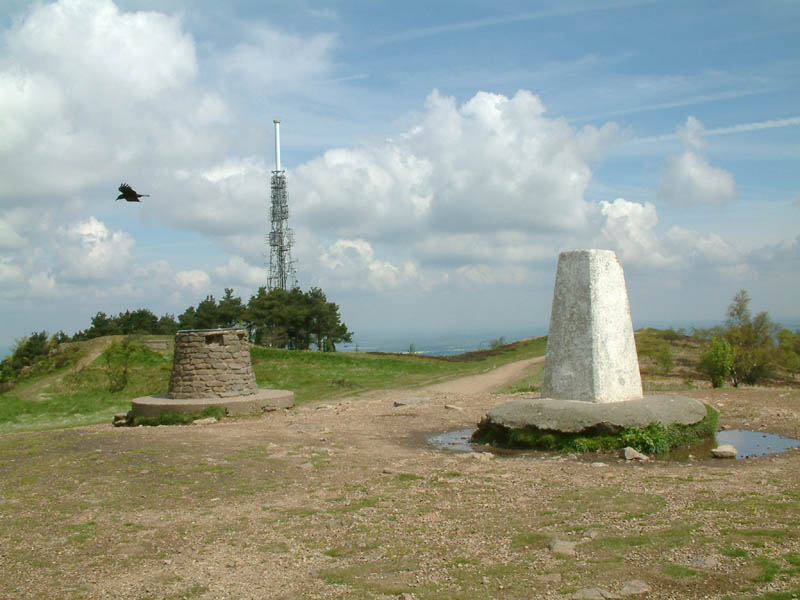 The summit of The Wrekin with its trig point, toposcope (viewfinder), and the "Beacon on The Wrekin", erected in 1999 for the Millennium celebration.

Parking at the foot of the Wrekin.

Rocky outcrop on the edge of the hill

Beech Avenue on North side of the hill. Going down from Halfway House towards Firing Range.

Bluebell woods on the slopes of the hill. This square is mostly wooded: these bluebells were by the path running west-east, merging with the public footpath near the east of the square.

Looking over The Ercall towards Wellington/Hadley and north Shropshire Plain in the far distance.

View of the hill.The lane here is part of 'The Mercian Way' National Cycle Route 45.

Shropshire cropfields and The Wrekin Seen from the Shropshire Union Canal near Soudley Bridge.