This is a moderate walk along Derwent and Ladybower Reservoirs, with a short climb to the woodland, farmland and moorland above the water. From the high points there are wonderful views of the Derwent Valley and the surrounding Peak District hills.
You'll also pass the old Derwent Village where two buildings remain, the Lodge and the schoolroom. An information panel tells you about the history of the village including how it was flooded when the Dam was built in the Second World War.
On your walk look out for wildlife including various birds of prey, mountain hares, golden plovers and pipistrelle bats.
The walk starts at the Fairholmes car park, where you'll find an excellent visitor centre and cafe. You then head to Derwent Dam where you pick up a waterside path along Derwent Reservoir's eastern side. Derwent Dam and the adjacent Howden Dam, were built at the beginning of the century and became famous for being used for RAF flying practice for the Barnes Wallis bouncing bomb in 1943 and then later in the Second World War film, Dambusters.
The walk heads through the woods of Hancock Wood, before climbing to Walker's Clough. You then cross the moorland above the reservoir with some truly wonderful views to enjoy. The route then descends to Ladybower Reservoir, where you pass along the water before returning to the car park.
If you would like to extend your walk then you could climb even higher to the wonderful Derwent Edge. The Millstone Grit escarpment reaches a height of over 1700ft at Back Tor with more great views to enjoy.
Geology enthusiasts can climb to Alport Castles on the western side of the water. You can start the walk from Fairholmes and climb to the spectacular rock formations via Howden Reservoir.
The waterside walk along Ladybower Reservoir is also nearby.

S33 0AQ - Please note: Postcode may be approximate for some rural locations

After your exercise head to the Ladybower Inn for refreshments. This traditional stone-built pub dates back to the 18th century when it served as a Coaching Inn. There's also a nice beer garden with views over the Ladybower reservoir. The pub is located on The Snake Pass, at the eastern end of the lower Ladybower reservoir. Postcode is S33 0AX.
The Fairholmes Visitor Centre at the start of the route also has a refreshment kiosk with nice picnic tables outside. Inside there's a wealth of information on the area including interactive exhibitions for all ages.

The reservoir and the surrounding woods are a great place for a dog walk and you will probably see plenty of other owners on your outing. During the summer months it is advised to keep them on leads because of the nesting wildlife.

Bay on the eastern shore with the moors above Birchenlee beyond. 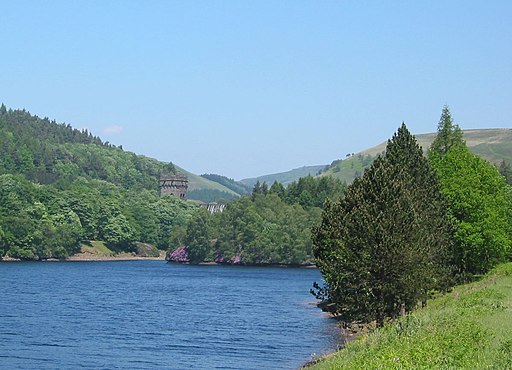 Derwent Reservoir, showing the island and the western tower of Howden Dam. 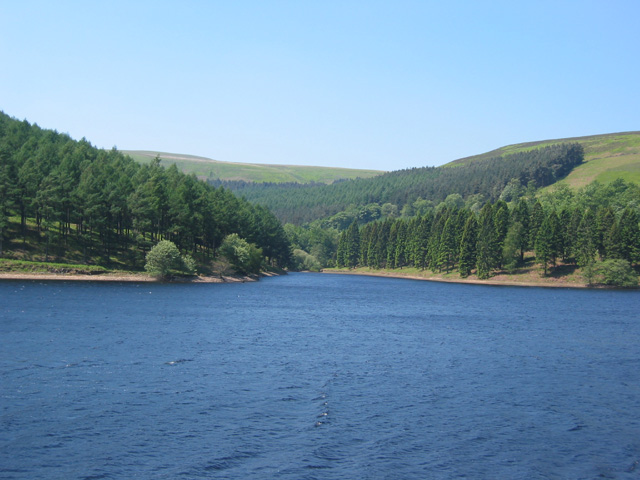 Derwent Village Uncovered. As far as I know, this was the last time that the Village of Derwent, submerged by Derwent Reservoir was totally exposed, due to an exceptionally low water table in 1995. On this picture, you can see the outline of the River very clearly and behind that is the site of Derwent Hall.

Island in Derwent Reservoir, with Howden Dam behind. The northern end of Derwent Reservoir, showing the small island (185884) and the western tower of Howden Dam behind (185883). Water can be seen cascading over the dam (right of tower). To the right, on the skyline, rises a minor peak on Howden Moor. View from the footpath along the reservoir's east bank, on a blazingly hot June afternoon