Enjoy a peaceful circular walk around the pretty Cole Mere in Shropshire. The mere is surrounded by mature woodland with two very attractive hay meadows where you can see wildflowers and orchids during the warmer months. The park attracts a variety of wildfowl including snipe, curlew and pochard. The Llangollen Canal also runs through Colmere and there are several other nearby meres including Blake Mere, White Mere and Newton Mere. As such, there is plenty of scope for continuing your walk if you have time.
You can start your walk from the Colemere Car Park at the south eastern end of the lake. It's located at postcode SY12 0QW for your sat navs.
The park is located a couple of miles east of Ellesmere. If you'd like to continue your walk you could head to the nearby Ellesmere Lake where there are lakeside and woodland footpaths to enjoy.

SY12 0QW - Please note: Postcode may be approximate for some rural locations

There's no on site cafe but there is a nice picnic lawn and some tables if you'd like to bring your own refreshment. Just to the east of the lake there's the little village of Lyneal where you'll find The Lazy Cow Cafe. Here you'll find a a farm and a cafe selling a good range of meals with some particularly delicious homemade cakes. You can find them at postcode SY12 0LG for your sat navs. The site includes a working farm where you can feed a variety of animals including some alpacas.

The woodland and lakeside paths are ideal for dog walking so you'll probably see other owners on your visit. There are bins dotted around the site too. Several rare ground nesting birds use the site for breeding between 1st March and 31st July. Please keep your dogs on a lead during this period to protect the wildlife. The Lazy Cow Cafe mentioned above is also dog friendly.

If you head east along the canal you could visit the Fenn's, Whixall and Bettisfield Mosses National Nature Reserve. The noteworthy reserve straddles the border between England and Wales. It is a significant site being one of the biggest and best raised bogs in Britain. The area is great for flora and fauna and also includes the old Ellesmere Canal. Near here you could pick up the epic Shropshire Way and follow the waymarked trail south to visit the town of Wem.
If you head north into Wales there's another pretty lake to see at Hanmer Mere. The adjacent village also includes a fine 16th century pub.
For more walking ideas in the area see the Shropshire Walks page.

Colemere. This is taken at the end of the mere, furthest from the car park.

Bridge into Colemere Woods. A good quality masonry arch for a humble trackway over a stream. 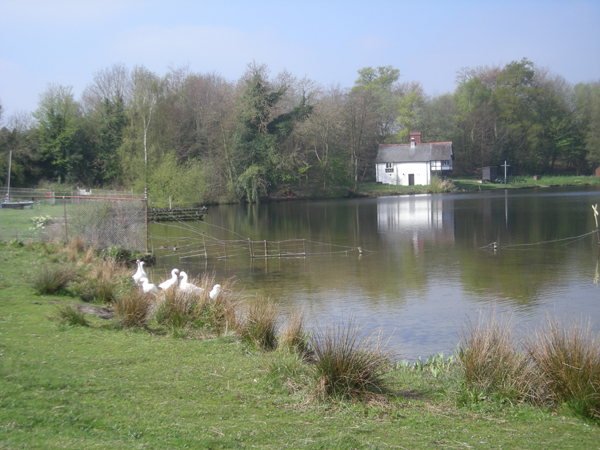 A small corner of Cole Mere.