This is a popular walk between these two major towns on the Kent coast. It's about a 7 mile walk, with some moderate climbs so a reasonable level of fitness is required. The walk takes you along cliff tops with great views and visits to the two country parks located on the route. You can return easily by catching the train back to Dover from Folkestone West railway station.
The walk starts at the docks in Dover and follows the North Downs Way to the ruins of the medieval Knights Templar Church, on Bredenstone hill. You continue past Aycliff to Samphire Hoe Country Park. The park was created by using chalk marl from the Channel Tunnel excavations and is found at the bottom of a section of the White Cliffs of Dover. There are great views over the Strait of Dover and a Nature Reserve with a large variety of wildlife to look out for.
You continue west, passing the  World War II coastal defence battery of Lydden Spout before coming to East Cliff and Warren Country Park. This route crosses the train line here to follow the coastal path but you could also pick up the woodland trails through the park. The park is formed of the East Cliffs of Folkestone, the sandy beaches of East Wear Bay and the land-slipped nature reserve land between the cliffs and the sea. There are more great views, interesting flora and fauna and three old Martello Towers to see. These were built on the cliffs in the early 19th century to protect against the French invasion of Napoleon.
The path continues along the coast, passing the Folkestone Roman Villa. The villa was built during the Roman Occupation of Britain, and is located in East Wear Bay. It's situated on a cliff top overlooking the English Channel, with views of the French coast at Boulogne on a clear day.
The final section descends to Folkestone, finishing at the harbour. Just down the coast you can visit Lower Leas Coastal Park if you wish to extend the walk. It's a lovely park with pretty gardens and a free adventure play area.
To travel along the coast in the other direction try the Dover to Deal Walk. 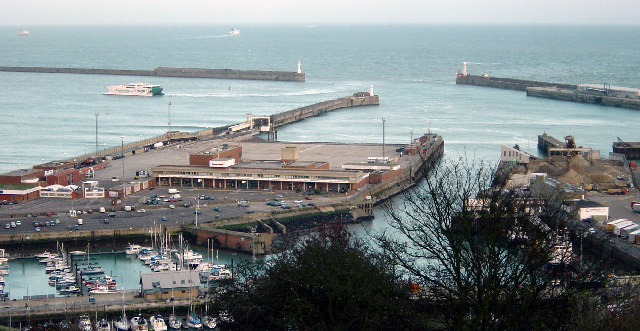 Folkestone, Warren and harbour from Battle of Britain Memorial