This canal-side walk takes you from Little Venice to Camden Town in London. The start point is in an area of London where the Paddington Arm of the Grand Union Canal meets the Regent's Canal. It's an attractive area with lots of narrowboats, tree lined paths and houses dating from the Regency period (early 19th century). Other notable highlights include the child friendly Puppet Theatre Barge and the ornamental Rembrandt Gardens.There's also a number of restaurants, shops, theatres, pubs and nice waterside cafes. If you are coming by public transport then Warwick Avenue tube station is just a stone's throw from Little Venice.
Starting at Little Venice the route follows the Regent's Canal north east, passing Maida Hill Tunnel and Lisson Grove Tunnel. On this section you can take a small detour and visit Abbey Road where the Beatles famously posed for Album Cover photo. The studios and the zebra crossing are located just a short distance to the north of the canal at Lisson Grove. Lord's Cricket Ground is also in the same area.
The canal continues past Regent's Park and Primrose Hill, passing close to London Zoo at the northern end of the park. You could take a detour here and climb Primrose Hill for splendid views over the city.
This route continues along the canal to Camden Lock where you can visit the famous Camden Market. Products sold on the stalls include crafts, clothing, bric-a-brac, and fast food. It is the fourth-most popular visitor attraction in London, attracting approximately 250,000 people each week.
To extend the walk you can continue along the Regent's Canal to the River Thames at Limehouse Basin.
At the start of the route you can pick up the Paddington Canal. 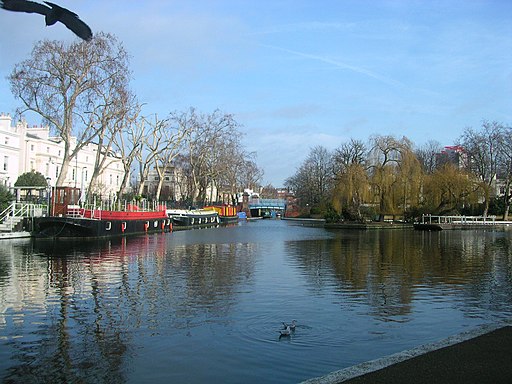