This long circular walk through the centre of Liverpool visits the city's most famous sights. You'll visit the waterfront, Albert Dock, Liverpool Festival Gardens, Sefton Park and Princes Park on this 10 mile trail. The route uses the waymarked Trans Pennine Trail so most of it is also suitable for cyclists.
The walk starts at St John's Gardens just next to Liverpool Lime Street train station. The pretty gardens consist of ornamental flower beds and several memorials to notable people of the city. For example you can view The Gladstone Monument dedicated to the memory of W. E. Gladstone, a former Prime Minister, who was born in Liverpool and died in 1898.
After exploring the gardens the route follows Whitechapel Street to the Cavern Club at 10 Mathew Street. The club is well known as the venue where the Beatles' UK popularity started. From 1961 to 1963 The Beatles made 292 appearances at the club, with their last occurring on 3rd August 1963, a month after the band recorded 'She Loves You'. This proved to be their best selling single and also the best selling single of the 1960s in the United Kingdom.
The route then heads towards the waterfront passing the impressive Liverpool ONE shopping, residential and leisure complex. The area includes a number of large retailers and the attractive Chavasse Park. Shortly after passing the development you come to the waterfront where you can enjoy a walk along the Liverpool Canal Link on Mann Island. This takes you past the Beatles statue to the pier and ferry terminal. Here you can catch a ferry across the Mersey to Birkenhead or Seacombe and explore the Wirral Peninsula on the Wirral Circular Trail or the Wirral Way long distance routes.
This walk heads south along the river, passing the Museum of Liverpool before coming to the famous Albert Dock. The site is the number one tourist attraction in Liverpool and the most visited multi-use attraction in the United Kingdom outside London, with in excess of four million visitors per year. You can enjoy a stroll around the dock and visit such attractions as the Merseyside Maritime Museum, the Beatles Story and the Tate Gallery Liverpool.
After exploring the dock you continue south, passing the John Lennon Peace Monument and the expansive Liverpool Docks before coming to the Liverpool Festival Gardens. There's lovely footpaths here, taking you to oriental gardens, pagodas, lakes, waterways and waterfalls.
The trail then leaves the waterfront and heads north east through St Michael's Hamlet to another highlight of the walk at the splendid Sefton Park Liverpool. Here you will find cycling trails and nice footpaths in a 235 acre park with a series of lakes, the delightful fairy glen with waterfalls, attractive gardens and a number of sculptures of well known historical figures. There's also the magnificent Palm House with with a variety of palm trees, orchids and a glasshouse.
You then head west through the nearby Princes Park where there is a path along the fishing lake. The trail continues through Toxteth, passing Liverpool Cathedral and St James Gardens, before returning to the city centre.
To continue your exercise in the city you could head to Croxteth Country Park to the east of the city. Rimrose Valley Country Park is located just to the north, near Crosby.
The Liverpool Loop Line is another good option. It follows a disused railway line from Halewood to Aintree.
The long distance Mersey Way also starts in Liverpool and runs all the way to Warrington along the river.

Just to the east of the route there's some nice woodland trails around Childwall Woods. The adjacent village of Childwall is also well worth a visit with its historic Abbey Inn, thought to date back to the 11th century. 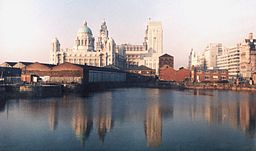