This walk visits a series of waterfalls just to the north of Hebden Bridge. Much of the area surrounding the site is private land so please stick to the public rights of way.
You can start the walk from the parking area on Hebden Bridge Road just to the east of the falls at Gib Slack. From here you follow footpaths west for about half a mile to reach the falls at Crimsworth Dean Beck. Here you'll find the rushing falls next to Lumb Bridge. There's also a plaque to Ted Hughes poem 'Six young Men' which concerns a group of men photographed at the falls before they went to fight in the first World War.
After admiring the falls you can follow paths running along the beck and through the peaceful woodland, before heading back to the parking area.
To continue your walking in the area head to the nearby Hardcastle Crags which are located just to the west of the falls on the Haworth-Hebden Bridge Walk. The National Trust run area is home to tumbling streams, beautiful waterfalls and Gibson Mill.

HX7 8RG - Please note: Postcode may be approximate for some rural locations

If you head west to Harcastle Crags there's a nice on site cafe inside the picturesque Gibson Mill. Run by the National Trust it includes outdoor seating with nice views of the river. The historic mill was built in the 1800s as part of the industrial revolution. It was driven by a water wheel and produced cotton cloth up until 1890. The mill is totally self-sufficient with electricity created from the natural surroundings.

Here is the poem by Ted Hughes, dedicated to six young men photographed at the falls shortly before going off to fight in World War I. They never returned.

The celluloid of a photograph holds them well -
Six young men, familiar to their friends.
Four decades that have faded and ochre-tinged
This photograph have not wrinkled the faces or the hands.
Though their cocked hats are not now fashionable,
Their shoes shine. One imparts an intimate smile,
One chews a grass, one lowers his eyes, bashful,
One is ridiculous with cocky pride -
Six months after this picture they were all dead.

All are trimmed for a Sunday jaunt. I know
That bilberried bank, that thick tree, that black wall,
Which are there yet and not changed. From where these sit
You hear the water of seven streams fall
To the roarer in the bottom, and through all
The leafy valley a rumouring of air go.
Pictured here, their expressions listen yet,
And still that valley has not changed its sound
Though their faces are four decades under the ground.

This one was shot in an attack and lay
Calling in the wire, then this one, his best friend,
Went out to bring him in and was shot too;
And this one, the very moment he was warned
From potting at tin-cans in no-man's land,
Fell back dead with his rifle-sights shot away.
The rest, nobody knows what they came to,
But come to the worst they must have done, and held it
Closer than their hope; all were killed.

Here see a man's photograph,
The locket of a smile, turned overnight
Into the hospital of his mangled last
Agony and hours; see bundled in it
His mightier-than-a-man dead bulk and weight:
And on this one place which keeps him alive
(In his Sunday best) see fall war's worst
Thinkable flash and rending, onto his smile
Forty years rotting into soil.

That man's not more alive whom you confront
And shake by the hand, see hale, hear speak loud,
Than any of these six celluloid smiles are,
Nor prehistoric or, fabulous beast more dead;
No thought so vivid as their smoking-blood:
To regard this photograph might well dement,
Such contradictory permanent horrors here
Smile from the single exposure and shoulder out
One's own body from its instant and heat.

Lumb Hole, Crimsworth Dean. The highlight of many a walk and picnic. And where six young friends met before being called up to fight in the First World War. They never saw Lumb Hole again. 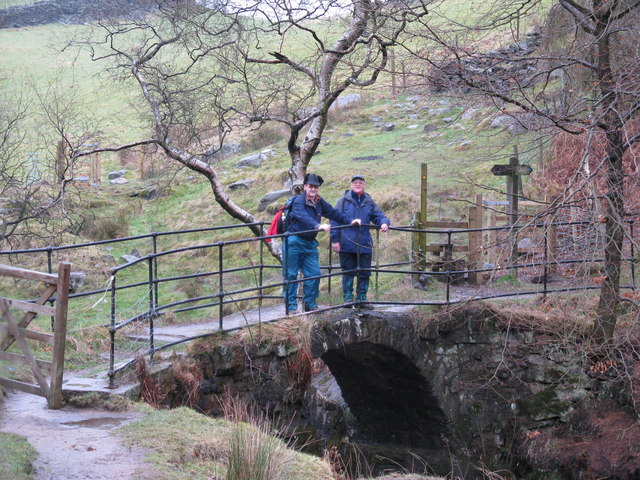