This interesting walk visits the site of a number of Early Neolithic chambered long barrows and megalithic monuments located in the lower valley of the River Medway, near Chatham.
The circular walk starts from the car park at the Blue Bell Hill picnic site, just to the south of the village. From here you can pick up the Maidstone Centenary Walk and follow it south west towards Eccles. You then turn south towards Hale Farm towards the site of the megaliths. These include Kit's Coty House and Little Kit's Coty House, constructed circa 4000 BCE, during the Early Neolithic period of British prehistory, surviving today in a ruined state. Archaeologists have established that the monument was built by pastoralist communities shortly after the introduction of agriculture to Britain from continental Europe. You'll also pass the Coffin Stone, a large sarsen stone located close to the other two monuments. Various archaeologists have argued, that the stone was part of a chambered long barrow constructed in the fourth millennium BCE, during Britain's Early Neolithic period. It is a rectangular stone lying flat and measuring 4.4 metres (14 ft) long and 2.8 metres (9.2 ft) wide.
After exploring the stones the walk picks up a section of the North Downs Way to take you back to the car park.
To extend the walk you can head west of the Medway to visit three other chambered tombs: the Coldrum Stones, Addington long barrow, and Chestnuts long barrow. You could also pick up the Medway Valley Walk and enjoy a stroll along the river.
Part of this walk uses the Pilgrims Way long distance trail which is another good option for further exploring the area. 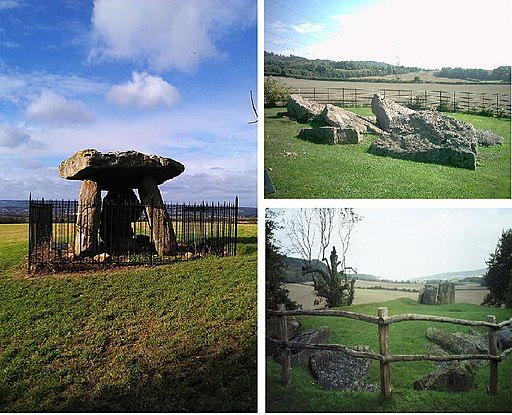