Enjoy a nice waterside walk along the River Cherwell in Oxford. The circular route takes you from the University parks to Summertown before visiting nearby Marston.
The walk starts from the Rainbow Bridge, a distinctive curved footbridge over the River Cherwell in the University Parks. The parks are a large parkland area slightly northeast of the city centre in Oxford. From the Rainbow bridge you can see punts travelling along the river in during the summer.
On the eastern side of the arched bridge you can pick up a footpath heading north toward Wolfson College, one of the constituent colleges of the University of Oxford. There is a footbridge across the river which leads into the college grounds here.
After passing the college you have the option of continuing north toward Cutteslowe where there is a nice pubic park. This route heads east toward Marston where you head south through the Oxford suburb. A path then follows the Marston Brook across the meadows before returning you to Rainbow Bridge.
A short distance south of the bridge you can extend your exercise on the Mesopotamia Walk and Addison's Walk. They are both delightful paths along the river behind Magdalen College. 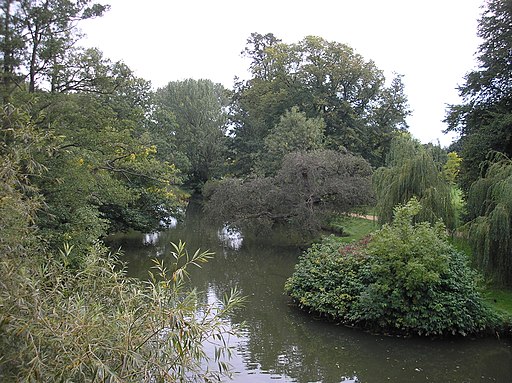 A downstream view of Cherwell from the High Bridge (also known as Rainbow Bridge) in the University Parks, Oxford.

Wolfson College Across the River Cherwell

Looking down the Cherwell to the High Bridge, University Parks, Oxford