This walk follows the Grand Union Canal from Uxbridge to Slough. It's about a 7 mile walk along the flat towpath so easy to complete in an afternoon. Uxbridge town is located in West London and accessible on the tube system as the western terminus for branches of the Metropolitan and Piccadilly lines of the London Underground.
The walk starts from the canal bridge at Uxbridge Moor, just to south west of the tube station and bus station. From here you head south to Little Britain where there is an aqueduct and a number of lakes. Around here you can also link up with the Colne Valley Way. This waymarked footpath branches of from the canal and provides an opportunity for exploring the Colne Valley further.
This route turns west from Yiewsley, passing a series of lakes and Shreding Green before coming in to Slough where the route finishes.

Uxbridge has an interesting history as the site of the attempted negotiations between King Charles I and the Parliamentary Army during the English Civil War. The public house at the centre of those events, since renamed the Crown & Treaty, still stands and is well worth a visit. The pub is Grade II* listed, and dates from 1576. There is even an album named after the pub by mercury prize nominated band Sweet Billy Pilgrim. The pub does very good food and also has a fine outdoor bar for the summer months. You can find the historic inn on Oxford Road at postcode UB8 1LU for your sat navs.

The route passes close to Langley Park Country Park as you approach Slough. The large park has some good woodland trails and two pretty lakes to see. It makes for a pleasant detour from the canal if you have time.

Uxbridge - canal, pub and flats. Taken from a bridge over the canal. The other side of the canal are large office blocks.

Grand Union Canal at Uxbridge. Viewed looking from the bridge at Uxbridge Lock with the marina on the left, the turbulent water from the outfall on the right causes a certain amount of stability issues for boat users slowly approaching the lock from the downstream side.

Uxbridge Lock, Grand Union Canal This shows both the former lock keeper's cottage and a cargo of aggregates waiting for the lock gates to be opened. 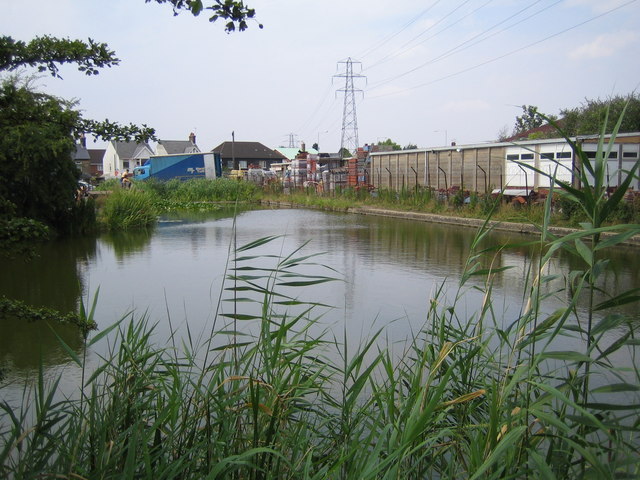 Grand Union Canal (Slough Arm). The end of the 1882-built Slough Arm of the Grand Union Canal to the east of Stoke Road in Slough, with the boat turning head basin in the foreground. The canal was built originally to convey bricks, and then gravel, to London.