This walk explores a fascinating series of forts, strong points and ditches located in Dover. The forts were created during the 18th and 19th centuries to protect the key port of Dover from both seaward and landward attack. There are good footpaths to follow around the elevated site which includes nice views towards Dover Castle and the North Downs.
Start the walk from Drop Redoubt Fort at the eastern end of the complex. It's located just to the south of Piory rail station and just behind the pier and marina. The construction of the Redoubt was in two periods: the first being from 1804-1808 during the Napoleonic Wars, and the second from 1859-1864 following the recommendations of the 1859 Royal Commission. Follow the footpaths west and they will take you to the noteworthy Knights Templar Church. The ruins date from the 11th century and are located on Bredenstone hill.
The route continues west to the second fort on the complex, known as 'The Citadel'. This structure was formerly a young offenders' institution, and was most recently used as the Dover Immigration Removal Centre. In the 19th century it contained barracks, stores and magazines arrayed around a large parade ground.
At the Citadel Battery the route turns around and heads east along the southern part of the site.
To continue your walking in the area head east and visit the historic Dover Castle and the famous White Cliffs on our Dover Cliffs Walk. The North Downs Way also runs through the site so you could pick this up easily too.

CT17 9AP - Please note: Postcode may be approximate for some rural locations

View across the Marinas from Western Heights, Dover. Dover Castle and the Eastern Docks are visible in the background.

Drop Redoubt Fort, The Bredenstone. The Remains of the western Roman lighthouse is called the Bredenstone or the Devil's Drop of Mortar after the putative nearby lost village of Braddon, within Drop Redoubt on Dover Western Heights.

Entrance to the Citadel, the immigration removal centre. Formerly the borstal but now run as a removal centre for illegal immigrants. 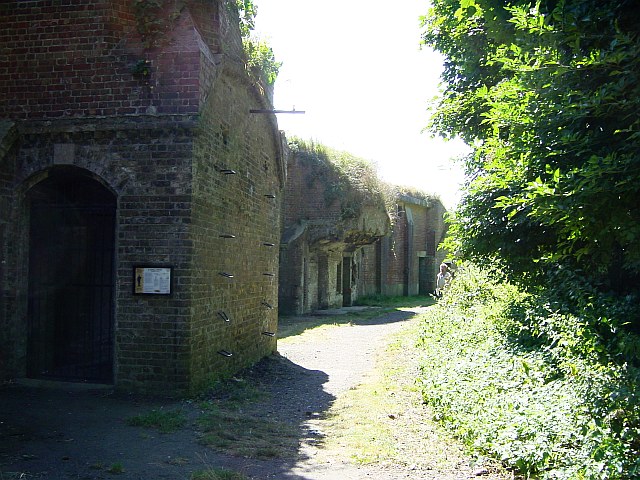 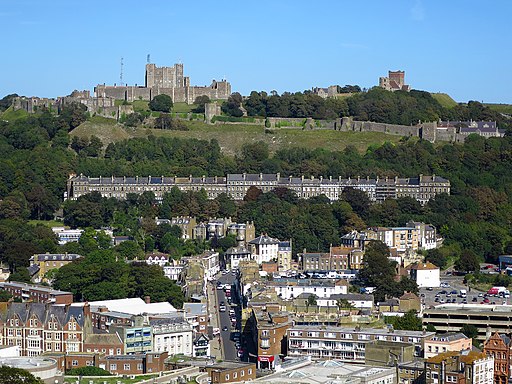 Dover Castle, from the Western Heights