Anston Stones Wood is a biological site of Special Scientific Interest in Anston, South Yorkshire. It's a nice place for a peaceful stroll with interesting vegetation and the Anston Brook running through the woods. The site is a local nature reserve consisting of grassland, scrub and wetland.  The woodland is the second best example of limestone woodland in South Yorkshire.
The area is known for its limestone gorges and interesting geological features. As such it is very popular with rock climbers. There is also an Ice Age Cave known as 'Dead Man's cave'.  In the 1960's ancient flint tools from the ice age and animal bones from animals such reindeer and hyena were uncovered.
The walk can be extended by heading east to Woodsetts via Lindrick Common. Just to the north is Swinston Hill Wood and if you head south you can pick up the Cuckoo Way and enjoy a stroll along the Chesterfield Canal.

S25 4DL - Please note: Postcode may be approximate for some rural locations 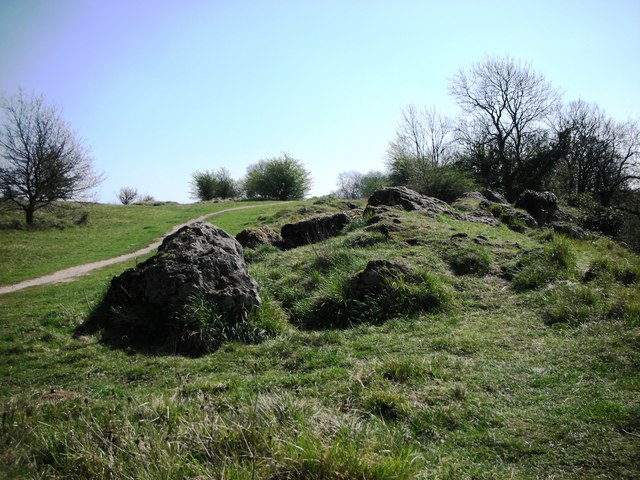 Anston Stones top path. The rocks seen to the right of the path are lumps of Permian dolomitic limestone. The outcrops were part of a 'coral garden' laid down when the area was covered by the Zechstein Sea.

Anston Stones Wood is situated on either side of an ancient river gorge and its flora and fauna contribute to it being designated as a Site of Special Scientific Interest. This picture, taken on the northern, top path shows Yew tree roots growing through the clints in the magnesian limestone.