Enjoy a peaceful walk through this lovely nature reserve near Newport, Staffordshire. In the reserve you'll find well surfaced footpaths taking you through pretty woodland and along the large mere which is the largest natural lake in the West Midlands. The area is great for birdwatching too. Look out for Eurasian curlew and common snipe from one of the bird hides. The reedbed habitat also supports reed warbler and sedge warbler while marsh harrier and osprey have also been seen in the area.
This walk takes you to the reserve from the village of Forton just north of Newport. You can also reach the reserve by bike using  National Cycle Network Route 55 and Regional Route 75.

TF10 9DE - Please note: Postcode may be approximate for some rural locations

The mere is a nice place for a peaceful dog walk. Please keep them on leads in the reserve because of the wildlife though.

A few miles to the north east there's the town of Eccleshall. The town has a particularly interesting high street with a number of Georgian buildings to admire. There's also a noteworthy 12th century church and a 13th century castle. You can walk from the town to the nearby Cop Mere where there are more nice waterside paths to try.
For more walking ideas in the area see the Staffordshire Walks page. 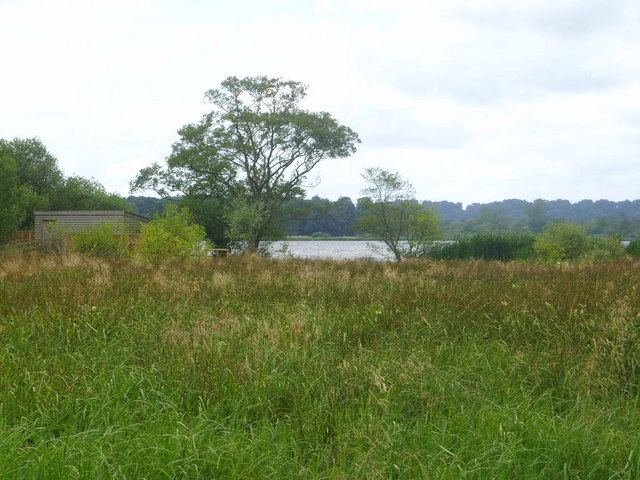 Reed beds and lily pads on the River Meese, on the western side of the mere.

View from the bird hide on Aqualate Mere, Staffordshire