Explore the Elizabethan town walls of Berwick-Upon-Tweed on this interesting circular walk. The easy walk runs for just over a mile so should suit most abilities. Along the way there's nice views of the River Tweed, the Royal Tweed Bridge and the impressive Royal Border Bridge, part of the East Coast Main Line. Other highlights include a number of Bastions (forts) and the Bell Tower which was built in 1577.
The route starts at the Cumberland Bastion at the northern end of the Northumberland based town. The path then heads east to the Brass Bastion and the 15th century Church of the Holy Trinity on the north eastern corner of the walls. You then turn south along the eastern portion, passing the Windmill Bastion on the way.
The walls then head west along the River Tweed Estuary to Coxon's tower, set photogenically next to the river at the south western corner. The route turns north here, passing along the river quay to Megs Mount at the north western end. From here it is a short stroll back to the Cumberland Bastion where the route finishes.
To continue your walking in the area you could pick up the Berwickshire Coastal Path which starts in the town. Follow the waymarked path north and you can visit the lovely Marshall Meadows Bay.

TD15 1BN - Please note: Postcode may be approximate for some rural locations

The walls were originally built in the early 14th century under Edward I, following his capture of the city from the Scots. They were then rebuilt in the 16th century. The new walls were much smaller in length, enclosing only two thirds of the medieval area, allowing them to include more artillery emplacements and five large stone bastions.
The Grade I listed walls have been described as being "by some measure the best-preserved example of town defences in Britain designed for post-medieval warfare".

Inside Cumberland Bastion at the start of the walk. Open Doors Day, 2008. A rare chance to get the soldier's eye view of manning the fortifications. Shelter from inclement weather was provided by archways such as that visible to the left of the cannon 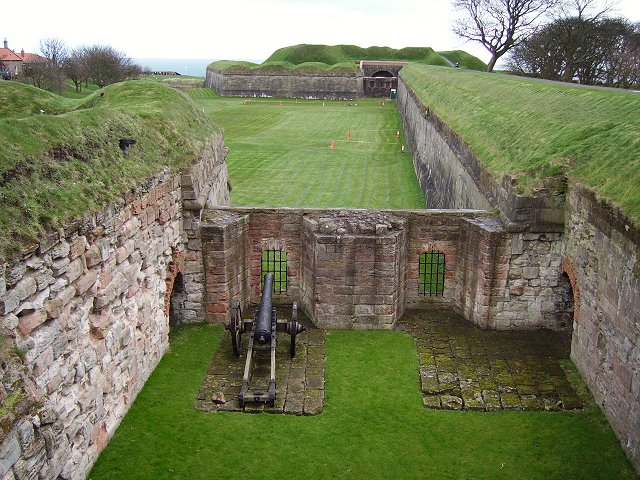 Built in the 16th Century to successfully hold the enclave on the north shore of the Tweed. Border towns often have some interesting military works, especially if "behind enemy lines" and this is no exception with well preserved walls surrounding the centre, even along the river.

Brass Bastion, Berwick Town Walls. There's a sheer drop from the grass verge of the walkway on the Elizabethan Town Walls down to the foot of Brass Bastion, which is the most northerly point of the fortifications on the seaward side. On the horizon the Bell Tower can be seen - it stands near the line of the earlier Edwardian walls

Bell Tower, Berwick, Northumberland. This is an Elizabethan stone octagonal four-storey tower, built in 1577, beside the medieval town wall. Over the centuries it has been considerably repaired and altered. The doors that gave access to the parapet walk, showing the original height of the wall, are still visible. As the name suggests, it was used to warn the defenders of the Elizabethan ramparts of a raid. 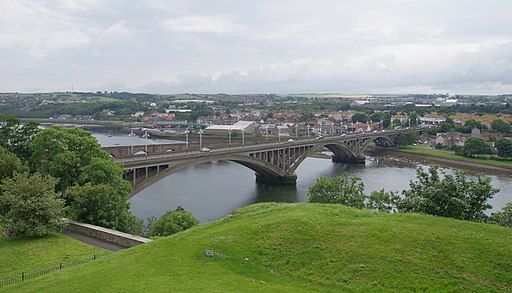 The Royal Tweed Bridge seen from the walls