This village in the Three Rivers District of Hertfordshire has some nice walks to try. This circular walk takes you to some of the highlights of the area including Chorleywood Common, the River Chess and Chenies Manor House. The village is easily accessible from London on the Metropolitan line of the London Underground.
The walk starts from the Chorleywood underground station which is a short stroll from the common. You can pick up the Chess Valley Walk just north of the station and follow it east to the open space which consists of 200 acres of common land and woodland.
After heading through the common you pass Chorleywood House. The 200-year-old manor house is surrounded by an estate with nice countryside and woodland. On certain open days you can enjoy walks in the grounds of the house. Soon after passing the old house you will come to the River Chess. Follow the trail north to Sarrat Bottom where the river bends to the east to take you through the Frogmore Meadows Nature Reserve. This lowland meadow is rich in wildflowers with different types of butterfly to look out for.
At Chenies Bottom you cross the river and head south towards Chenies Manor House. The Tudor House is a Grade I listed building and is surrounded by award-winning gardens. Original 13th Century features including a Medieval well, a dungeon and a reputed priest hole. You can tour the house and garden for a fee, from April to October.
After exploring the house the route then heads south on a bridleway through Carpenter's Wood before returning to the centre of Chorleywood.
To continue your walking in the area head south to Rickmansworth where there are nice footpaths along the River Colne and the Grand Union Canal.

Chorleywood Common.  Viewed looking south eastwards along one of the wide rides through the wood. 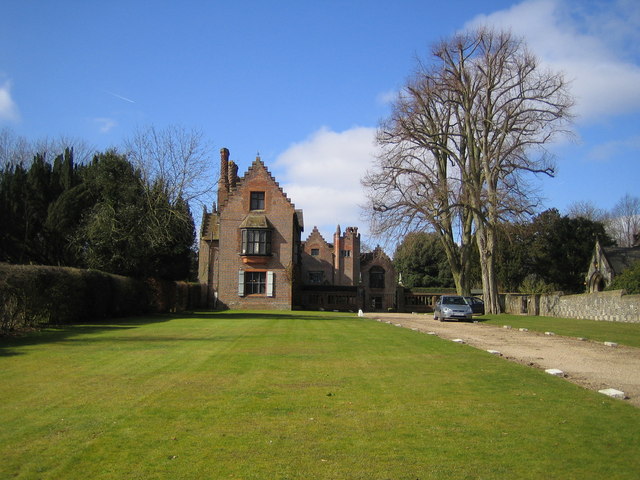 Topiary and trees at Chenies