Claife Heights lies between Lake Windermere and Esthwaite Water in the Lake District. It's a splendid area for a walk with peaceful woodland, a number of tranquil tarns and wonderful views over the surrounding lakes. It's a special place as it has a distinctive feel to the rest of the lake district. It was also a place visited regularly by Beatrix Potter who lived at the nearby Hill Top.
This circular walk starts at the ferry landing on the western shore of Windermere. You can catch the ferry from Bowness on Windermere. The route then heads to Far Sawrey before climbing through woodland to High Blind How, the high point on Claife Heights at 270 m (890 ft). The walk then passes a series of delightful tarns including Wise Een Tarn and Moss Eccles tarn. Beatrix Potter owned Moss Eccles and donated it to the National Trust after her death. The tarn is stocked with water lilies and fish, and surrounded by pretty rhododendrons. It's a particularly tranquil spot and one you'll want to stop at for a while. From the tarn the walk then descends on a good path to Far Sawrey and then on to the ferry.
An alternative route takes you to the National Trust view point of Claife Station along the western shore of Windermere. See the video below for details of this.
If you'd like to continue your walking in this area then you could visit the nearby Wray Castle or climb to Latterbarrow Hill.

One the walk you could stop off for refreshment in Far Sawrey at the Cuckoo Brow. The inn is situated in a lovely spot at the top of the hill in between Lake Windermere and Hawkshead Village. They serve good quality food and have an outdoor seating area. You can find them at a postcode of LA22 0LQ for your sat navs.

The area makes for a fine dog walk and the Cuckoo Brow mentioned above is also dog friendly.

A shallow body of water at Brown Stone Moss

View from the summit. The trig point on the top of Claife Heights (270m or 886ft above sea level). This is the top of the high ground between Windermere and Hawkshead. 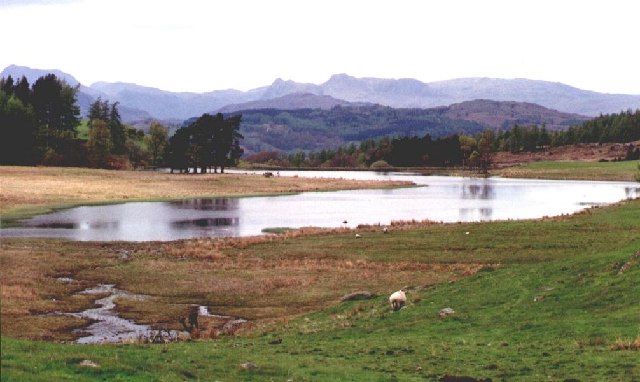 Wise Een Tarn is on the top of the Heights, and from here in clear weather you can see a wonderful panorama from Coniston to the Langdale Fells.

St Peter's Church, Far Sawrey. The early English Gothic style church dates from 1869. It is situated in a remote spot in a field on the way up to Claife Heights from the ferry.

Bowness Ferry. Approaching Ferry House Apart from its annual maintenance, the ferry is advertised as running 364 days per year. It is scheduled to leave every 20 minutes, and can accommodate up to 18 cars. In the summer months, a launch and minibus also meet at this point.

Moss Eccles Tarn. Alfred Wainwright called it the "most attractive" tarn on Claife Heights. After Beatrix Potter married in 1913, she lived in Castle Cottage in nearby Far Sawrey and enjoying rowing on the tranquil tarn on summer evenings. In 1926, she bought part of the tarn, planting the water lilies and stocking it with fish.