This short circular walk visits the spectacular Derwent Dam and the famous Dambusters monument in the Dark Peak area of the Peak District.
The walk starts from the Fairholmes car park just to the south of the dam, at the northern end of Ladybower Reservoir. From here you can follow footpaths a short distance north to the Dambusters commemorative plaque. During the Second World War, the reservoir was used by pilots of the 617 Squadron for practising the low-level flights needed for Operation Chastise (commonly known as the "Dam Busters" raids), due to its similarity to the German dams. One of the towers on the dam houses the Derwent Valley Museum. The exhibition tells the tale of Squadron 617 and its training for Operation Chastise and also has a display on the history of the Derwent valley and the lost villages of Derwent and Ashopton. You can purchase original and genuine prints and signatures from members of the squadron here too.
The silence was broken again over this dam in 1954 with the filming of 'The Dambusters' starring Richard Todd as Guy Gibson, during this time three aircraft were used (one Lancaster & two Shakletons) to recreate the near impossible task of low level flying plus the added danger of flying at night.
To continue your walking in the area you could try our Derwent Reservoir Walk along the eastern side of the water. This will take you to Howden Dam and the old Derwent Village where two buildings remain, the Lodge and the schoolroom. An information panel tells you about the history of the village including how it was flooded when the Dam was built in the Second World War.
For fine views over the dam and the reservoir try the climb to Derwent Edge or our Howden Reservoir and Margery Hill Walk.

At the Ladybower Dam can pick up the Thornhill Trail. The shared cycling and walking trail runs along a disused railway line towards Thornhill and Bamford in the Hope Valley. 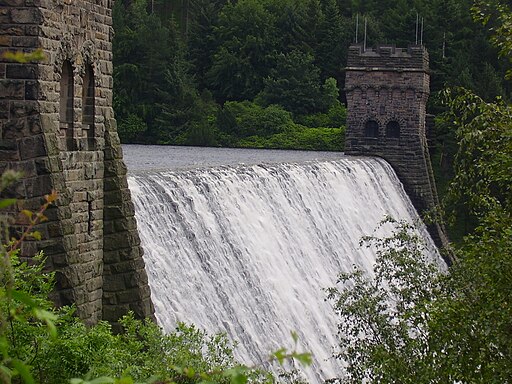 Spillway to allow overflow from the dam when the water levels are high. 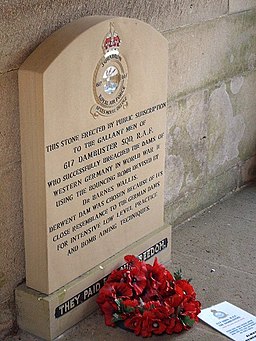 Along Derwent Dam. View through the railings towards the western tower of Derwent Dam 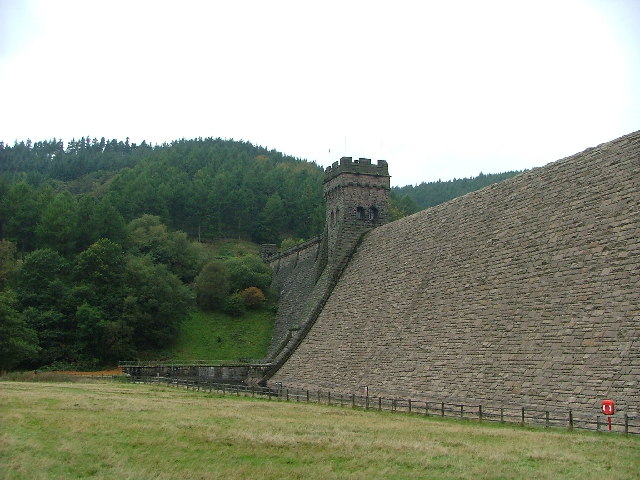