This circular walk takes you around the pretty Iffley Lock and Meadows next to the River Thames in Oxford.
The walk starts from the St Mary the Virgin Church in the village of Iffley, just south of Oxford. The church is noteworthy as it is Grade I listed and built c.1160 by the St Remy family, probably financed with funds from the de Clintons of Kenilworth Castle. The building has not been changed too much over the centuries, retaining its Norman round-arched windows and doorways.
From the village it is a short walk west to the river and the lock. The original lock was built by the Oxford-Burcot Commission in 1631 and the Thames Navigation Commission replaced this in 1793. The lock has a set of rollers to allow punts and rowing boats to be moved between the water levels. At this point you can cross the western side and explore the lovely Iffley Meadows. There's nice waterside paths here along the Weir Mills Stream and views of cattle grazing on the meadows. The meadows are also a nature reserve notable for their large population of snake's head fritillaries. On the eastern section of the meadows you can pick up a section of the Thames Path and follow it south along the river to Iffley.
To continue your walking in the area try the Oxford River Walk. This visits several of the university rowing clubs and the nearby Christchurch Meadow.

West front of St Mary the Virgin parish church, Iffley, Oxfordshire. The doorway is Norman; the round window above it is 19th-century Norman revival.

Weir on the River Thames at Iffley 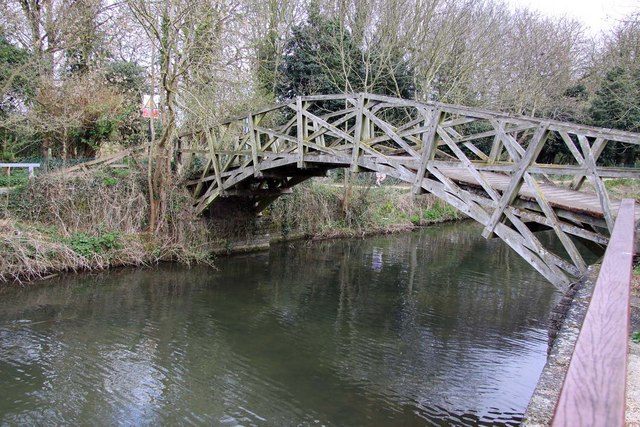 The Mathematical Bridge at Iffley

The towpath next to the Isis

A narrowboat in Iffley Lock

A convoy of canada geese and their goslings pass sedately under the wooden bridge over one of the channels parallel to Iffley Lock.