The Isle of Sheppey is located of the north coast of Kent. There's some lovely coastal walking trails here and several nature reserves with an abundance of wildlife to see.
This walk explores the southern part of the island visiting Leysdown Coastal Park, Shell Ness, The Swale Nature Reserve and the Isle of Harty.
The walk starts from the car park in Leysdown on Sea and heads south to visit the Leysdown Coastal Park. Here there are bracing walks along the coastal wall with splendid views out to sea.
The route continues south to the Hamlet of Shellness where there are a number of Coastguard cottages and the Swale Nature Reserve. This remote reserve is an excellent place for birdwatching with Marsh Harrier, Barn Owls, Egrets, Herons and various other waders. You can follow a footpath west along the banks of The Swale, the channel which separates Sheppey from the mainland. To the south there are views over Whitstable Bay to the town of Whitstable on the opposite side.
Follow the path west and it will take you to the Isle of Harty Trail where you will pass the noteworthy Harty Church. The Grade II listed church is thought to originate from the 11th century. In the hamlet you can also pay a visit to the 16th century Ferry Inn for some refreshments. It's a lovely place to stop off at what is roughly the half way point on the walk.
The route then leaves Harty, heading north past Mocketts Cottages towards Capel Fleet. Footpaths will then take you across Leysdown Marshes before returning to Leysdown village.

On the route stop off at the Ferry House Inn in the hamlet of Harty. The 16th century inn sits in a lovely location on the Swale Estuary. They have a good menu and a kitchen garden where they grow fresh vegetables. There's also a beer garden where you can sit outside and enjoy views across the estuary. You can find them at postcode ME12 4BQ for your sat navs. The pub is also dog friendly if you have your canine friend with you.
Back in Leysdown the Bay View is a good choice for some excellent fish and chips. You can find them at 287 Leysdown Road with a postcode of ME12 4AQ for your sat navs.

The island also plays a big part in aviation history. In the early 20th century the American Wright Brothers, made the Isle of Sheppey a focal point of British aviation. They commissioned the Short brothers, who had already set up a factory on land between Leysdown and Shellness, to build aeroplanes to fly at Eastchurch. The brothers later came to the Island to visit the new flying grounds of Lord Brabazon's Royal Aero Club which formed in Leysdown in the early 1900s to popularise ballooning. In 1909, Moore-Brabazon made the first live cargo flight by fixed-wing aircraft, by tying a waste-paper basket to a wing strut of his Shorts-built Wright aircraft. Then, using it as a "cargo hold", he airlifted one small pig.
To continue your walking on the island head north to pick up the Sheerness Way. This shared cycling and walking trail explores the Isle of Sheppy coast around Sheerness beach, while there is also a pleasant waterside section along the Queenborough Lines canal bank as well. This area also include the Barton's Point Coastal Park.
On the western part of the island you will find the Elmley National Nature Reserve. There's more nice footpaths here with a number of bird hides with fine views over the waders in the estuary.
The epic Thames Estuary Path starts/finishes on the island and will take you to Foulness Island.
For more walking ideas in the county see the Kent Walks page.

Leysdown Sea Wall. Walkers alongside the sea wall which has been strengthened with steel.

Hamlet of Shellness, Private Beach and Groynes. Even the Beach at low-tide has no permitted access.

Avenue of Trees on Isle of Harty. Looking towards Graveney across the Swale. Shelterbelt of trees sheltering a crop of sweetcorn from the strong island winds. 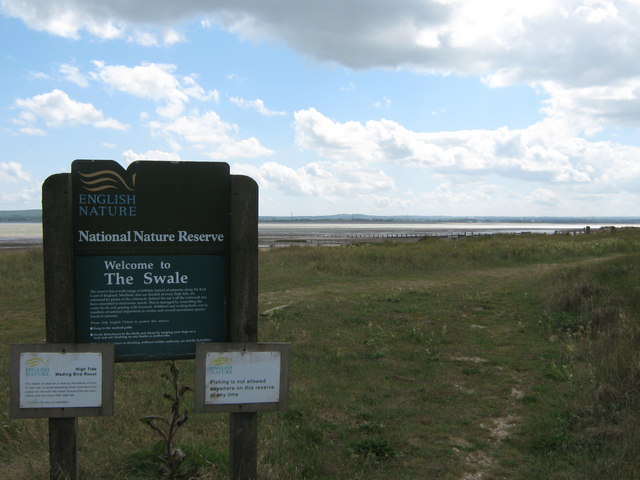 Swale Nature Reserve. This large nature reserve includes the beach at Shellness and then stretches south-west along the Harty Marshes. A path leads alongside a dyke beside the Hamlet of Shellness to the coast and then along the high tide bank. 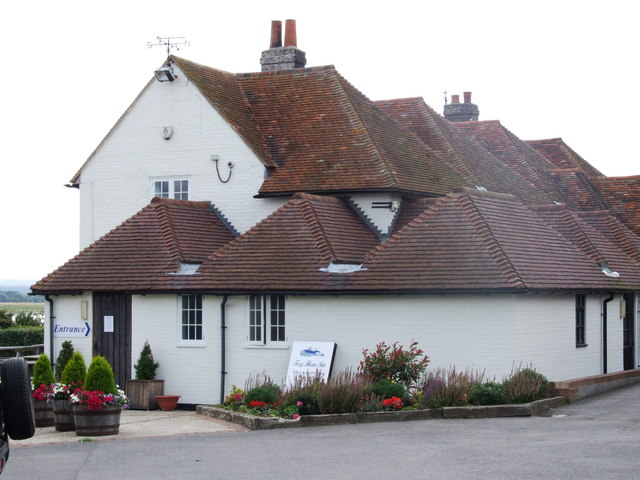 Ferry Inn, Harty. This 16th century inn is located on the southern tip of the island and makes for a nice pit stop on the walk.

Harty Church. The hamlet that it served has long gone the building is a real architectural treasure built in 1089 it is substantially unchanged although much of the wood has been replaced over the centuries. In recent times the tower has had to have many wooden pan tiles replaced after repeated attacks by woodpeckers. One remarkable feature is that despite being only yards from a local 240v power distribution line the church has no electricity and is lit by wick oil lamps and candles.

Bridge Over a Dike. This bridge over the dike in Swale Nature Reserve leads to a 2km nature trail here the reeds have not been allowed to remain so there is open water for ducks and the like.