This circular walk explores a beautiful area of coast and countryside in the Quantocks.
The walk starts at the large car park just north of Kilve. It's a short walk from here to the fascinating Kilve Beach. Part of the Jurassic coastline the beach is a good place for fossil hunting. You'll also pass the Oil retort which was built in 1924 to burn the oil rich shale beds here. Though the venture failed the old building remains.
The footpath passes along the coast with great views of the cliffs and surrounding countryside. You then turn inland to the village of East Quantoxhead. It's a pretty place with thatched cottages, a medieval tithe barn, a duck pond, a mill house and an interesting manor house with a medieval tower. The route then leaves the village and passes more countryside and some woodland before returning you to the car park.

TA5 1EG - Please note: Postcode may be approximate for some rural locations

Head into Kilve village and you could enjoy some post walk rest and refreshment at the Hood Arms. The historic coaching inn dates back to the 17th century and serves a fine Sunday roast. They have a lovely garden area and also provide accommodation if you'd like to stay in the area. You can find them at postcode TA5 1EA for you sat navs.
Near the car park there's also the Chantry Tea Gardens where you can enjoy a delicious cream tea.

The beach and coastal path are great for dog walking. You'll probably see other owners on your visit. The Hood Arms and tea rooms are also dog friendly.

The West Somerset Coast Path, Quantock Greenway and the Coleridge Way all pass through the area, providing an opportunity to extend your walking in the area. You could follow the West Somerset Coast path east to Lilstock Beach and the power station at Hinkley Point. Heading west would take you towards Watchet. The nearby village has an interesting maritime history with many old buildings including two museums and an ancient 16th century inn.
The Coleridge Way can be picked up at nearby West Quantoxhead. The epic trail follows in the footsteps of poet Samuel Taylor Coleridge, visiting some of the places that inspired his works.
Heading south would take you to the pretty village of Holford where you could climb to the Dowsborough Camp Iron Age Hill Fort. 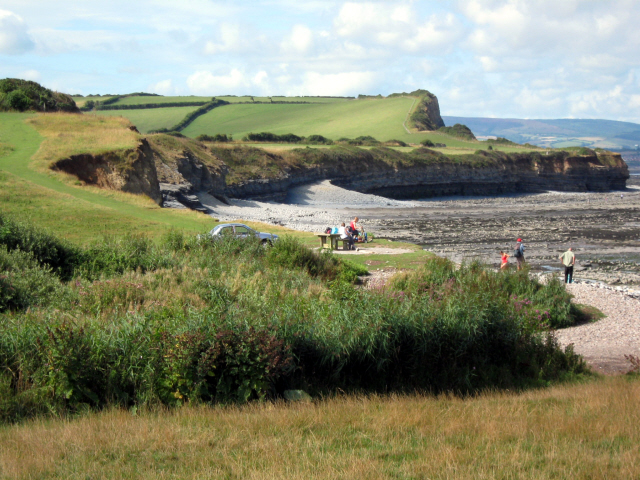 The beach at Kilve, looking west

Permissive path from Quantock's Head. This is the permissive footpath shortly before it joins the public footpath between East Quantoxhead and Kilve beach. In the distance the Range Quadrant Hut can just be seen on the cliff edge

Rockface, Kilve Beach. There is a clear fault line marked by a narrow quartz band cutting diagonally through the sedimentary shale and limestone rocks here. This quartz line also marks a change in the angle of the strata from near horizontal in the foreground to about 30ş in the further rockface. This beach is very interesting both geologically and palaeontologically as a wander along the beach will turn up many fossils especially traces of ammonites.

The track from Kilve Beach. This is the view towards the Car Park and Kilve village from the track to the beach. The chimney in the middle of the picture is the top of the old brick retort. This is the remains of an oil extractor built in the 1920's to process the oil rich shale in the cliffs. The ivy growing out of the stack has been shaped by the wind off the sea.