The town of Leatherhead is in a good position for walking, situated on the edge of the North Downs and Surrey Hills AONB. There's nice riverside trails along the River Mole and miles of woodland footpaths in the nearby Box Hill and Norbury Parks to the south.
This walk from the town takes you along a section of the Mole Gap Trail to Box Hill Country Park. The walk starts from the train station where you can pick up the waymarked trail and follow it south along the River Mole. The trail passes Fairfield, Fetcham Grove, Thorncroft and Norbury Park Farm before coming to Westhumble.
The trail then heads south east into Box Hill park, climbing to the viewpoint at the southern edge.
Follow the woodland trails east through Oak Wood and you will come to Box Hill village. The trail heads north here, skirting the edge of Headley Heath before turning west across Mickleham Downs.
Around Norbury Park Farm you rejoin with the river trail and follow it north back to Leatherhead station.

The Running Horse in Leatherhead is a historic pub of some note. It dates back to 1403 and is ideally located next to the River Mole. There's a charming interior and a nice pub garden if the weather is fine. The pub was originally known as Rummings House, after Eleynor Rumminge who was written about by Henry VIII's poet John Skelton. The poem can be found on a wall in the pub. Legend also has it that Elizabeth I spent a night at the inn due to floods making the river Mole impossible to cross. You can find the pub on Bridge Street with a postcode of KT22 8BZ for your sat navs.

The river paths and the woodland trails at Box Hill make for a fine dog walk. The Running Horse mentioned above is also dog friendly.

Ranmore Common and Denbies Hillside are located near to the town. There's some good walking trails to try here. A short distance to the west are the Bookham Commons. This National Trust owned area has miles footpaths taking you to grassland, ponds and ancient woodland. It's a particularly good area for wildlife with several species present at the site.
You could also continue along the Mole Gap Trail into the neighbouring town of Dorking where you can pick up the epic Greensand Way.
To the north of the town there's Oxshott Heath and Woods to visit. The village is also notable as being one of the most expensive places to live in the country. Residents include several premier league footballers and tennis player Andy Murray.
For more walking ideas in the area see the North Downs Walks and the Surrey Hills Walks pages.

River Mole in the town. Looking south-east from Vicarage Lane. 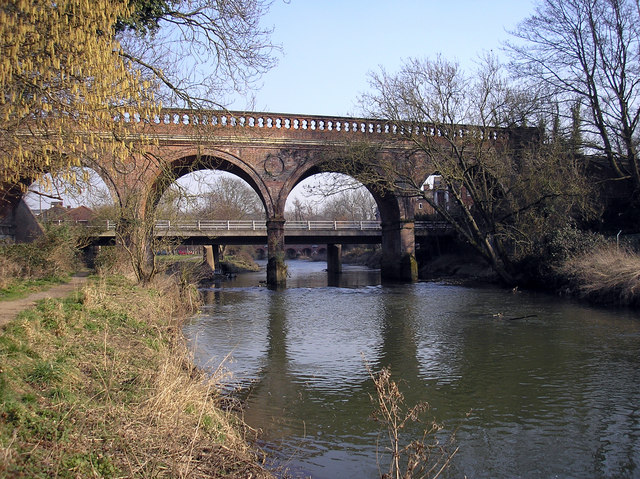 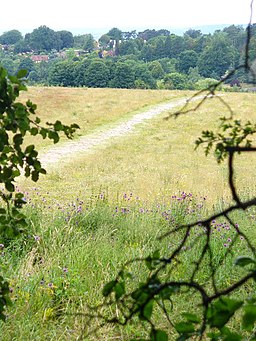 Leatherhead Downs. Grassy hillside on the chalk/flint base of the North Downs.

River Mole. Viewed looking downstream from Leatherhead Bridge towards the B2122 Waterway Road bridge, then the brick railway bridge.

Mole Valley. Looking across the valley to Fetcham Downs, just south of the town. 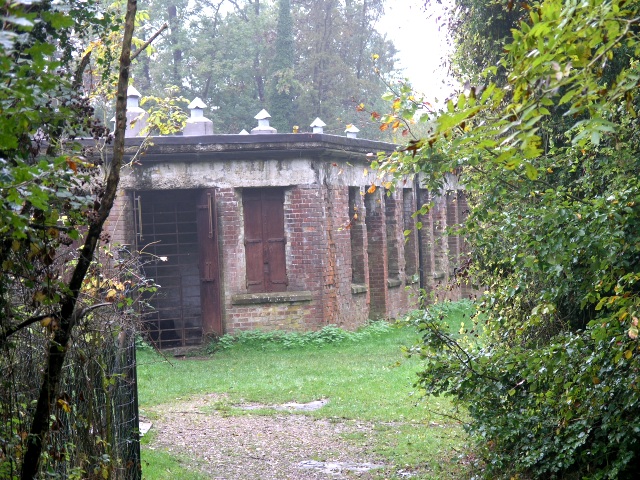 Box Hill Fort. Part of a line of 13 forts along the south to protect London, built in 1899. Never permanently manned, the adjacent building which housed the fort's caretaker now houses the National Trust visitor centre. The fort itself is now a listed building and today is the home to a colony of bats. Special large grilles have been fitted to the door to allow them to come and go as they like.

Downland in Norbury Park. Looking north towards Leatherhead across the grassy hillside on the west side of the Mole Gap. Here is a clay capping on top of the chalk and flint North Downs.

The Running Horse. The oldest inn in Leatherhead where John Wesley preached