This walk climbs to the Iron Age hill fort which spans Midsummer Hill in the Malvern Hills AONB. The route runs for just over a mile and includes a moderate climb. On the way there's some nice woodland trails with lots of pretty bluebells to look out for in the spring. After the short climb you will be rewarded with fine views over Worcestershire and Herefordshire.
The route starts from the parking area at Hollybush, off the A438, just to the south of the hill. From here you can pick up footpaths heading north through woodland toward Hollybush Hill. The hill lies just to the east of Midsummer Hill and is the site of an Iron Age hill fort which spans both hills. The hillfort is protected as a Scheduled Ancient Monument and is owned by Natural England. The site is considered unusual in that the ramparts enclose two hills and the intervening valley. It was built around 390 BC and it's thought that the settlement was occupied by 1500 people until it was destroyed by fire in AD 48.
Midsummer Hill stands at a height of 284 m (932 ft) and commands fine views over the surrounding countryside. Most of the lovely Eastnor Deer Park is visible including the notable obelisk. After exploring the site the route picks up a section of the Worcestershire Way long distance trail to descend back to the car park.
To extend the walk you can continue north along the Worcestershire Way to the nearby Herefordshire Beacon and British Camp.

HR8 1ET - Please note: Postcode may be approximate for some rural locations

For more walking ideas in the area see the Malvern Hills Walks page. 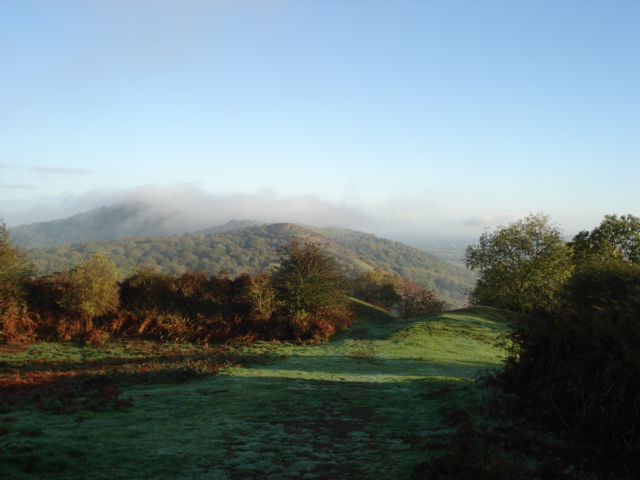 Midsummer Hill, viewed from the north-west. 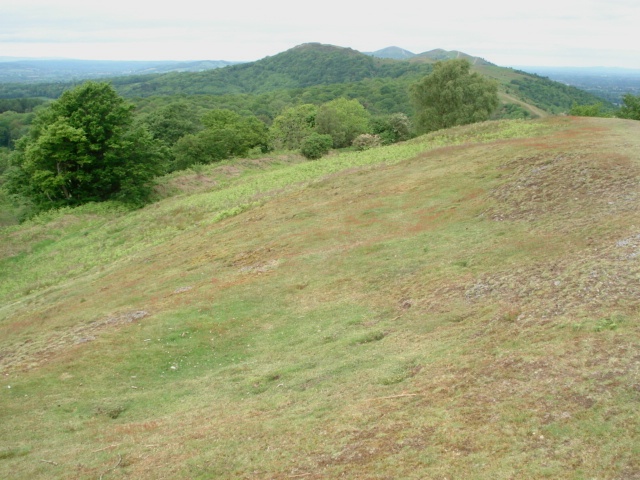 Midsummer Hill. Looking north with the spine of the Malverns ahead. The ditch of the hill fort is just above the tree line here.

Spring at Midsummer Hill Iron-Age Hill Fort. A supply of water just within the defences of the iron-age town. Now a pond enjoyed by wildlife - spot the duck.

Midsummer Hill and Eastnor Park.  View towards the obelisk from the southern end of the hill.

Path climbing Hollybush Hill. Steepish path from the lane climbs southwards through the woodland at Hollybush Roughs to reach the hillfort ramparts just ahead to the right. Plenty of bluebells here in the spring.

This relatively flat area was covered in small square iron age houses two thousand years ago. The top of Midsummer Hill adorned with its shelter is on the left of the picture. Extensive archaeological excavation was carried out here in the late 1960s by Dr Stan Stanford showing that the huts were continuously rebuilt on their own plots over several hundreds of years. Just about visible is the mediaeval rabbit warren in the middle of the picture.

Bluebells on Hollybush Hill.  Looking down the steep, wooded, eastern side of the hill.