Enjoy a waterside walk around the Milngavie Reservoirs in East Dunbartonshire. The site is a popular place for walkers with nice footpaths to follow around the Craigmaddie and Mugdock reservoirs. The area is surrounded by attractive woodland with nice views across the water to the surrounding countryside.
You can start the walk at the western side of Mugdock Reservoir where there is a car park on Mugdock Road. Then follow the footpath round to Craigmaddie Reservoir, crossing between the two bodies of water. Paths then take you around the Water Treatment Works before returning you to the car park.
The reservoirs sit on the eastern side of Mugdock Country Park. It's a great place to extend your walk with miles woodland trails, the ruins of Mugdock Castle and the pretty Mugdock Loch.
The epic West Highland Way long distance trail also starts in Milngavie, passing just to the south of the water. You could pick up the trail and follow it along Allander Water to Craigallian Loch and Carbeth Loch. The trail runs on for 95 miles (153 km) eventually finishing at the town of Fort William.
The Kelvin Walkway also starts in the town. You can follow the River Kelvin all the way to the Glasgow Heliport.

G62 8LD - Please note: Postcode may be approximate for some rural locations

Just north of the Mugdock visitor centre there's Dumbrock Loch. The small loch is popular with wild swimmers. Around the loch there are also other footpaths taking you to the adjacent Dumbrock Muir where you can see Highland cattle roaming around.
Just to the south there's more waterside trails along the tranquil Bardowie Loch.
To the north east there's the pretty Loch Ardinning. The small loch is owned by the Scottish Wildlife Trust and is a great place for easy walks and wildlife spotting.
To the north west there's the interesting Burncrooks Reservoir Walk which visits the unusual narrow rocky chasm at the Whangie before heading to the pretty reservoir. Near here there's also something of a hidden gem at the Devil's Pulpit in Finnich Glen. There's a wonderful deep sandstone gorge and rushing waterfall to see in this geologically fascinating area. 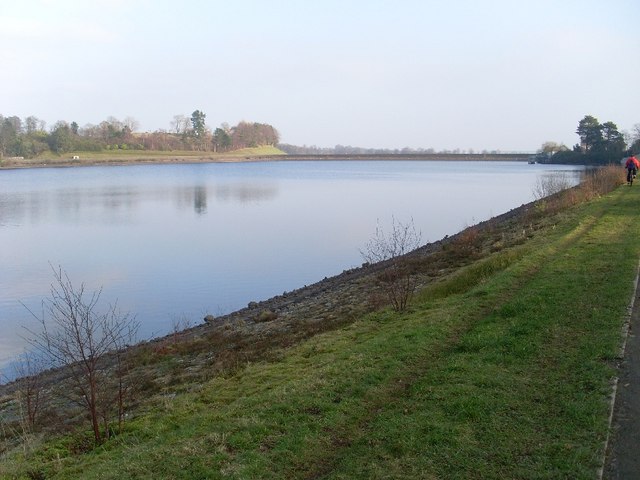 Looking back across Craigmaddie Reservoir

The eastern view of Craigmaddie Reservoir