This forest near Newport has a series of good cycling and walking trails to try.
There's lots of wildlife to see in the area with red squirrels and a variety of woodland birds. Look out for garden warbler, nightjar, woodcock, green, great spotted woodpecker and long eared owl as you make your way along the paths. For cyclists there are mostly flat paths with a few hills and jumps for mountain bikers to try. The forest is composed of mainly mixed coniferous and deciduous woodland.
You can start your outing from the public car park at the south eastern corner of the woods at a postcode of PO30 5LZ for your sat navs. It's located just to the north west of Newport town centre.
To continue your woodland walking on the island head to Brighstone Forest. Brighstone is the largest forest on the island with Parkhurst the second largest. At the site there's some excellent coastal views from a couple of hills located in and around the forest.

PO30 5LZ - Please note: Postcode may be approximate for some rural locations

As you'd imagine the woodland trails are ideal for dog walking. On a fine day you will probably bump into other owners with their pets.

To continue your walking from Newport you could pick up any one of multiple waymarked trails. The popular Tennyson Trail will take you from Newport to Alum Bay via Brighstone, Freshwater and Tennyson Down. The Bembridge Trail runs to Bembridge, passing the delightful village of Brading on the way. The Stenbury Trail runs to Appuldurcombe, Stenbury and Week Downs before finishing at the delightful Ventnor botanic gardens on the coast.
The Red Squirrel Trail also passes through Newport. This long distance cycle route explores some of the most attractive countryside and coast on the island.
For more walking ideas in the area see the Isle of Wight Walks page.

Parkhurst Forest. At the start of the Red Squirrel Trail near the car park and picnic area.

On one of the major tracks through the forest, heading west to east. The difference in status is clearly shown on the 1:50K map but not on the 1:25K map.

Entering the forest. From the west a footpath runs directly into the north-western edge of the forest, although the first section is not open access land. The hedgerow on the right was excellent for blackberries. 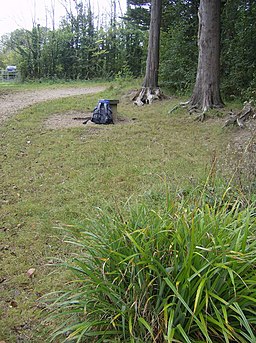 Resting place in the forest. At the junction of three major paths, is a convenient seat. Just beyond can be seen a gateway into the open area shown on the map. This is not part of the forest open access land but is a nature reserve with limited access.

Junction in the forest. There is a maze of paths in the forest, but they seem to be clearly and accurately marked on the 1:25K map. This is the first one from the Pallancegate entrance, heading south, just at the northern edge of this grid square.