Follow a network of footpaths around this large nature reserve in Doncaster. There are nearly 500 acres to explore with habitats including marsh, scrub, waterways, grassland and woodland. Over 230 species of bird have been spotted in the reserve including Bittern, Greater Spotted Woodpecker and Kingfisher. Also look out for other wildlife including Roe Deer and Grass Snakes.
There is an abundance of interesting plantlife in the reserve too. Yellow iris and pink violets can be seen near the waterways while hawthorn blossom lines the pathways. The reserve also has very good on site facilities including a Visitor centre and cafe. It is located less than 2 miles south of the centre of Doncaster.

DN4 8DB - Please note: Postcode may be approximate for some rural locations

Head a few miles north from the reserve and you'll find some nice woodland trails around Sandall Beat Wood.
You could also pick up the Doncaster River Walk and visit the picturesque Sprotbrough Falls and the impressive Conisbrough Viaduct.
The long distance Trans Pennine Trail and Doncastrian Way can also be picked up here.
To the east you can pick up the Peatlands Way to explore Hatfield Moors and the Humberhead Peatlands National Nature Reserve. The moors are the second largest lowland raised peat bog in England and notable for their diversity of wildlife and plantlife.

The café and visitor centre. Set in the middle of the reserve and a fair walk from the car park.

Mother Drain. Much work is going on on the Potteric Carr Nature Reserve, and presumably a bridge is planned here. 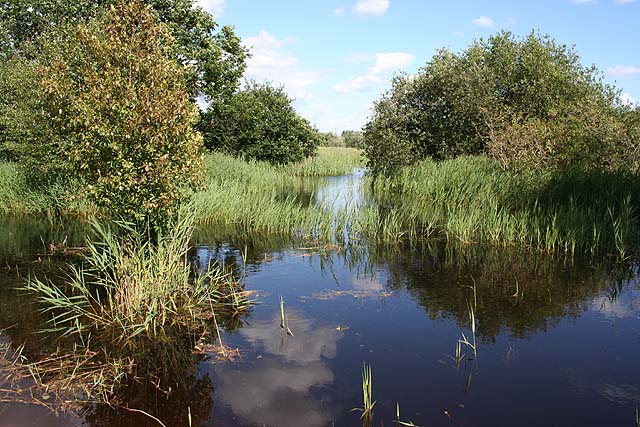 The wetlands area after heavy rain.

Huxter Well Drain. With brick barn adjacent, close to the M18 motorway and the Nature Reserve.

Bridleway bridge over The Mother Drain