This walk from the town takes you along the River Slea to the neighbouring villages of Anwick and South Kyme. It's about a 9 mile walk along a flat waterside footpath. On the way you'll pass a series of old bridges and locks with nice views of the surrounding Lincolnshire countryside.
The walk starts in Sleaford just to the north east of the train station. From here you can pick up the river path and follow it north east towards Anwick, passing Haverholme Priory and Wood on the way. The present priory ruin is the remains of a Gothic building built around 1835 to designs by the architect Henry Edward Kendall. This was a rebuild of an earlier house dating from 1780. The ruins are now a Grade II listed building and designated Ancient Monument
You continue east, passing Ewerby Waithe Common before arriving in the village of South Kyme. The village is very pretty with the Kyme Eau stream running through it. There's a nice footpath running along this picturesque waterway in both directions. You'll also pass South Kyme Tower, the remains of a 14th-century castle.

The Barge and Bottle is a good choice for some post walk refreshments. They do good food and have a nice outdoor seating area for the summer months. You can find the pub on Carre Street with a postcode of NG34 7TW for your sat navs.

The Spires and Steeples walk starts in Sleaford. This long distance trail runs all the way to Lincoln through a number of historical villages and beautiful countryside. The name refers to the Spires of the churches and to the rural sport of Steeple chasing.
For more walking ideas around Sleaford see the Lincolnshire Walks page.

The River Slea at Cogglesford Mill

The Remains Of Haverholme Priory

The Kyme Eau, South Kyme. Looking westwards from the Town Bridge. Note the wooden sculpture by the footpath. 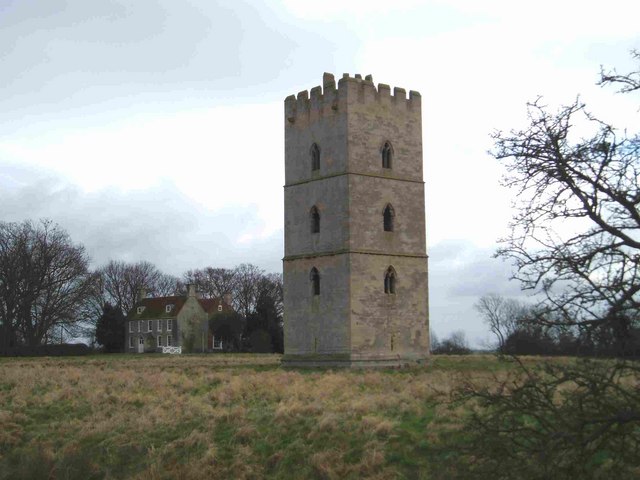 South Kyme Tower, Lincolnshire: the remains of a 14th-century castle