The Warwickshire town of Stratford Upon Avon is famously associated with William Shakespeare. It's a very attractive place with a fascinating history and a number of great walks to try. This short circular walk takes you along the River Avon to the Stratford Upon Avon race course. It's about 1.5 mile walk along the river to the course with the option of returning on the opposite side by crossing the river at the bridge near the race course.
The walk starts from the Grade I listed Clopton Bridge which was built in 1486/7. Along the way you'll pass a number of interesting landmarks including the famouse Royal Shakespeare Theatre, Stratford-upon-Avon Cricket Club Ground and Stratford Butterfly Farm. The attraction is well worth a visit with several species of free flying butterflies, free flying birds, a pool containing fish, and running water. Also of interest is the Church of the Holy Trinity on the western side of the river. The Grade I listed building is known Shakespeare's Church, due to its fame as the place of baptism and burial of William Shakespeare. It's a fascinating building and one of the highlights on the walk. Built in 1210  it contains a 14th-century sanctuary knocker and twenty-six 15th-century misericord seats in the chancel.

Other Walks near and around Stratford Upon Avon

The Bear is located in a lovely spot by the river. The pub dates back to 1662 and has outdoor seating and a decent menu. You can find them at Swans Nest with a postcode of CV37 7LS for your sat navs. The pub is also dog friendly if you have your canine friend with you.

If you follow the river south west you could visit the lovely riverside village of Bidford on Avon. The Saxon settlement includes a Grade I listed bridge dating from the early 15th century and Big Meadow, a 26 acre recreational park next to the river.
To the west is the village of Inkberrow. It's a worthy place to visit with a picturesque village green, a historic church and a fine 16th century pub. The settlement is also notable as the model for Ambridge, the setting of BBC Radio 4's long-running series The Archers.
For more walking ideas in the area see the Warwickshire Walks page. 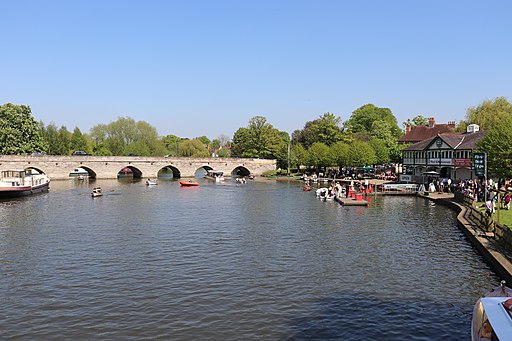 Royal Shakespeare Theatre south. There are over 1000 seats in the theatre. The complex also includes a Rooftop Restaurant and Bar with views over the River Avon, a Riverside Cafe and a Terrace. 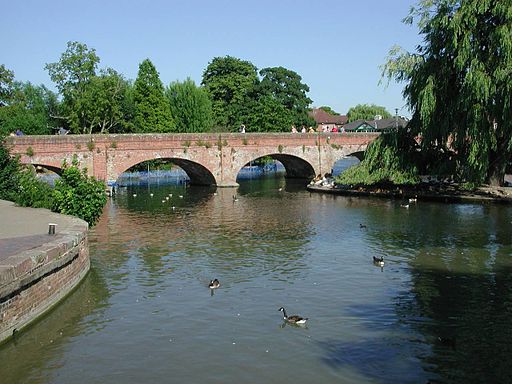 Street theatre being performed outside Shakespeare's birthplace. This restored 16th-century half-timbered house is situated in Henley Street. He was born here in 1564 and spent his childhood years in the house. 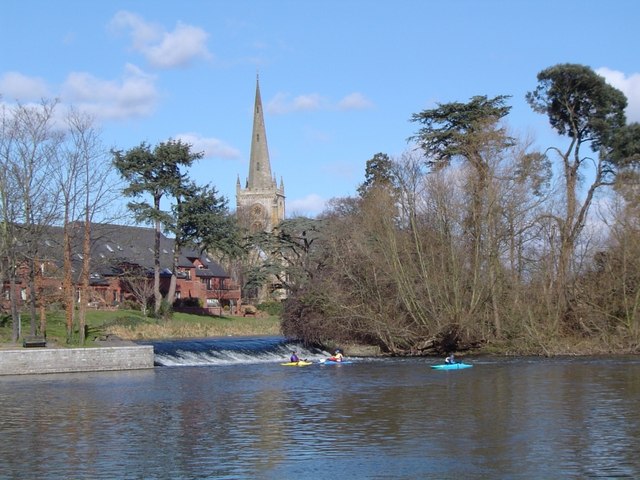 Water fountain. It is located in the park beside the canal basin. 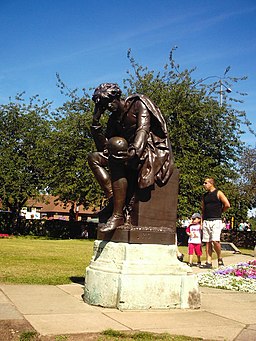 The Gower memorial, shows Hamlet statue in Bancroft gardens. These pretty gardens are a nice place for an easy stroll in the town centre. They are located next to the Bancroft Canal Basin, the river and the RSC theatre.