This is a fine circular walk using a section of the Teesdale Way between Barnard Castle and Eggleston. It runs for about 12 miles using waymarked footpaths on both sides of the river. You'll visit the villages of Egglestone, Ronaldkirk and Cotherstone, while enjoying some splendid scenery.
The walk starts in the popular town of Barnard Castle, situated on the River Tees. The attractive town includes a historic 12th century castle where the walk begins. The castle includes views over the Tees Gorge, a sensory garden of scented plants and the fascinating remains of the medieval chapel of St Margaret. From here you pick up the riverside path heading north west towards Cotherstone Crag. There then follows a short woodland section through Shipley Wood before coming to Eggleston where you cross the river.
The return leg follows the trail along the western side of the Tees, with the first section taking you to the little village of Romaldkirk. Here you will find a pretty village green and a noteworthy church.  The Grade 1 listed building, contains surviving sections of Anglo-Saxon walls either side of the chancel arch, as well as a late medieval rood stair, a stone tomb effigy of Hugh Fitz Henry (who died on campaign with Edward I in 1305) in chain mail, and a 12th-century font.
You continue toward Cotherstone, crossing the River Balder and passing the remains of Cotherstone Castle on the way. The final section takes you through Pecknell Wood before returning to Barnard Castle.
To extend the walk continue south east along the river to Egglestone Abbey. The interesting riverside ruins include remains of a 13th century church and a range of living quarters.
You could also try our Tees Railway Walk which runs from Cotherstone to Ronaldkirk along a disused railway line. 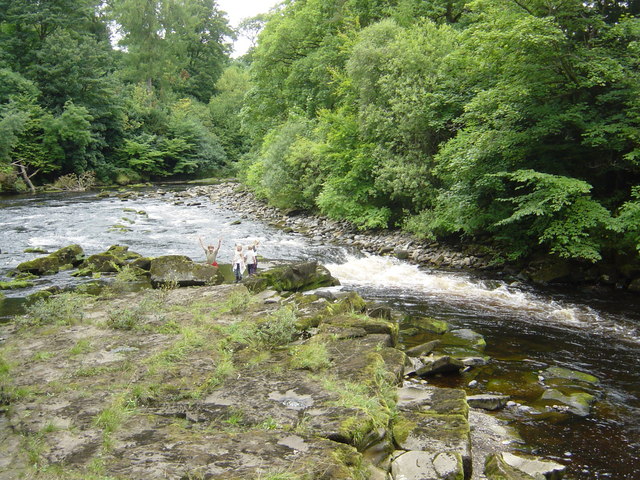 Village Green near the Church, Romaldkirk