This London cycleway runs from Kentish Town to Elephant & Castle along safer roads. The cycleways are good for commuters or anyone looking for a safer route through central London.
The route starts in Kentish Town and heads south east to Somers Town and St Pancras. Near here there's Russel Square, the interesting area of Bloomsbury and the British Museum. There's also the Charles Dickens Musuem and Foundling Museum just off the route too.
You continue east passing the Westminster Kingsway College and the Postal Museum as you come into Farringdon near Clerkenwell. The route then heads south passing Farringdon train station, the Smithfield Market and the City Thameslink train station. Near here you can take a slight diversion from the route to visit St Paul's cathedral which lies just to the east.
The route continues south to reach the Thames where you cross the river on Blackfriars Bridge. You then pass Southwark tube station before heading south east to finish at Elephant and Castle. This final section passes close to the Imperial War Museum.

You could also try Quietway 1 for another cycle route through the capital. It runs from Waterloo to Greenwich through Lambeth, Southwark, Lewisham and Greenwich. The route uses a series of back roads and quiet streets.
Quietway 2 runs from Walthamstow in the east to Acton in the West of London.

Kentish Town. Looking north along Kentish Town Road. The name 'Kentish Town' seems a strange one for a north London district, but is believed to derive from 'the estate of a man named Kentish'. The destination on the bus ('Parliament Hill Fields') is incorrect; it is heading to Oxford circus. 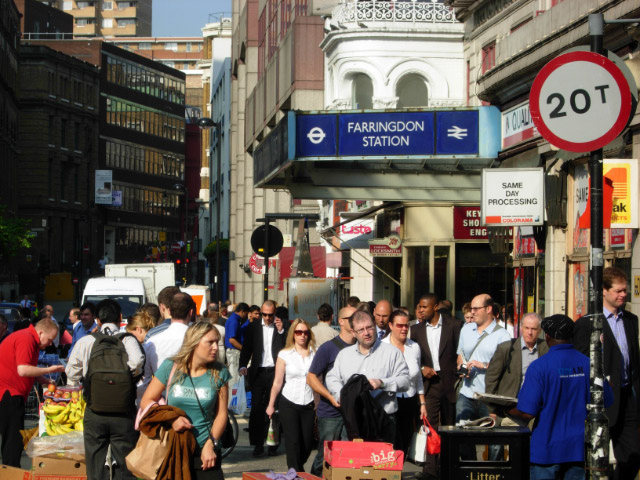 Farringdon Station. Early morning commuters fill the pavement outside Farringdon station as they disperse to their offices on a glorious late spring day. The pavement fruit seller and the smell of fresh coffee from the numerous open-fronted cafes in the area lend a vaguely continental atmosphere.

Elephant and Castle. Outside the tube station and the appropriately named "Hannibal House", by the bus stops, is this imaginative sculpture relating to the unusual name of this part of south London.