This is a hugely popular climb to the peak of Arthur's Seat in Edinburgh's Holyrood Park. It's a fairly challenging hike with the hill reaching a height of 251 m (823 ft) at the top. Here you can enjoy panoramic views of the city, the coast and the surrounding mountains.
The site is geologically significant being part of the Arthur's Seat Volcano site of special scientific interest. Like the rock on which Edinburgh Castle is built, the hill was formed by an extinct volcano system of the Carboniferous age, which was then eroded by a glacier about 350 million years ago.
The shortest route to the top is from the Dunsapie Loch, just to the east of the hill. There's a car park there and trails leading up from the loch to the peak, which is a short distance away. This longer circular route climbs to Arthur's seat from Holyrood Palace, just to the north of the hill.
Starting from the car park near the palace, you first bear east before turning west and climbing along Salisbury Crags. There's some fine views back down to the palace from here with the Scottish Parliament and the Firth of Forth also visible on a clear day.
After passing along the crags you pass Gutted Haddie before coming to the summit which is the site of a hill fort. After taking in the wide ranging views you descend towards the remains of St Anthony's Chapel. The atmospheric ruins stand on a rocky outcrop above St Margaret's Loch, commanding excellent views over North Edinburgh, Leith and the River Forth.
From the chapel you continue the descent to St Margaret's Loch where you will see lots of ducks, geese and swans on the water. You then pass the natural spring at St Margaret's Well, before returning to the car park. Near here you can also visit the fascinating Dynamic Earth visitor attraction. The principal focus of Dynamic Earth is to facilitate a better public understanding of the processes that have shaped the Earth (known as earth science). This includes the Big Bang, abiogenesis, plate tectonics and glaciation.
To continue your walking in the area you could head north west and enjoy another climb to Calton Hill. The hill is home to a number of significant monuments and the City Observatory.
Also nearby are Bonaly Country Park and Dalkeith Country Park where there's more nice walking and cycling trails to try. In the parks there's nice woodland trails, reservoirs and riverside paths to enjoy.

EH8 8AS - Please note: Postcode may be approximate for some rural locations

At the northern side of the park you could enjoy a delicious cream tea at the Cafe at the Palace. You can find them at The Royal Mile, 98 Canongate, EH8 8DX.

The hill and surrounding parkland make for a great walk for fit dogs. You will probably see other owners on your visit.

Just to the south of the hill there's the pretty Duddingston Loch to explore. There's some nice waterside paths and the splendid Dr Neil's Garden to enjoy here. There's also some history in Duddingston village with a 12th century church and a 14th century pub, thought to be oldest in Scotland.
For more walking ideas in the area see the Edinburgh Walks page. 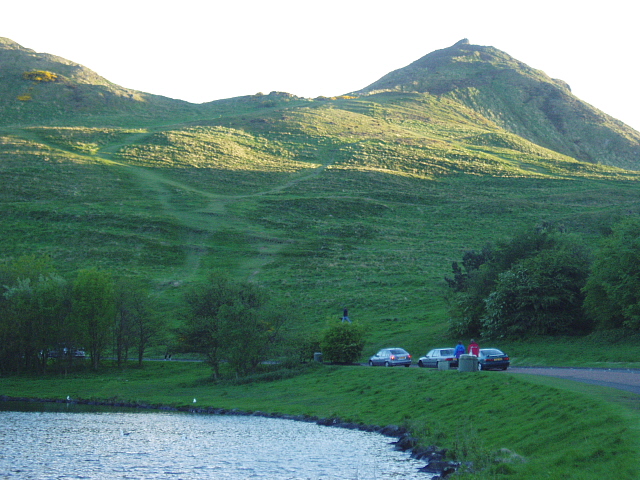 Fish Statue in the park