Enjoy a short walk to Calton Hill in Edinburgh and enjoy lovely views across the city to the coast. It's a short and fairly easy climb with the hill also home to a number of significant monuments and the City Observatory.
The walk starts at the western end of the hill, next to Regent Road. Here you will find the Dugald Stewart Monument, dedicated to the Scottish philosopher. Dugald Stewart was a professor at the University of Edinburgh, holding the chair of moral philosophy from 1786 until his death. From the monument follow the path east to the Nelson Monument, paid for by public subscription and erected on the hill in 1816. You can climb the spiral staircase for enhanced views along Princes Street below. There's also a path off to the side which you can follow to the south viewpoint. This route continues to the National Monument, Scotland's national memorial to the Scottish soldiers and sailors who died fighting in the Napoleonic Wars. The structure is modelled on the Parthenon in Athens but due to the lack of funds, was left unfinished in 1829.  From here there are wonderful views to the Firth of Forth, Arthur's Seat, Salisbury Crags and Holyrood Park.
The walk continues past the monument and heads along Hulme Walk to the North Viewpoint before heading towards the City Observatory. The astronomical observatory was established in 1776 and includes a fine old gothic tower in the southwest corner. The central building is designed in the style of a Greek temple and houses the 6-inch (15 cm) refractor in its dome and the 6.4-inch (16 cm) transit telescope.
To extend your walking in the area, head south east and visit Holyrood Park where you can climb to Arthur's Seat. The park is only a 10 minute walk from Calton Hill and includes several small lochs, a ruined chapel and the fascinating Dynamic Earth. The principal focus of Dynamic Earth is to facilitate a better public understanding of the processes that have shaped the Earth (known as earth science). This includes the Big Bang, abiogenesis, plate tectonics and glaciation.

EH7 5AA - Please note: Postcode may be approximate for some rural locations

Just to the south of Arthur's Seat there's the pretty Duddingston Loch to explore. There's some nice waterside paths and the splendid Dr Neil's Garden to enjoy here. There's also some history in Duddingston village with a 12th century church and a 14th century pub, thought to be oldest in Scotland.
For more walking ideas in the area see the Edinburgh Walks page. 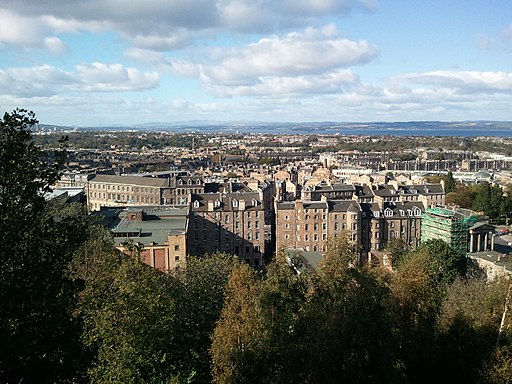 View to the coast 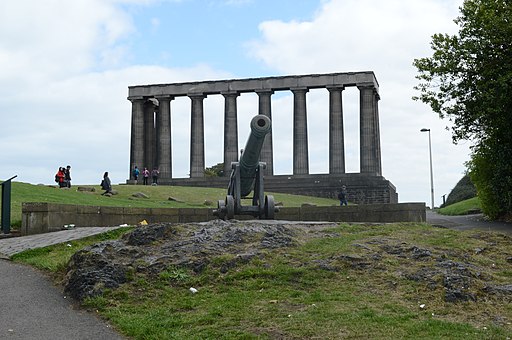 City view with hills in the distance 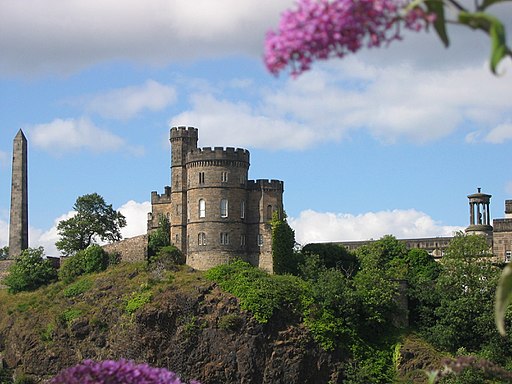 Lovely view up to the hill