Black Down and Beacon Batch

Enjoy a climb to this lovely viewpoint on this circular walk in the Mendip Hills. Black Down is the highest hill in the Mendip Hills, with Beacon Batch the summit point.
This route is the shortest ascent from the Burrington Combe car park just to the north of the hill. The walk makes use of the Limestone Link and the Mendip Way long distance trails to create a circular route around the hill. The route runs for just over 4 miles and includes a moderate climb.
Starting from the Burrington Combe car park off the B3134 you pick up a section of the Limestone Way, heading south. Other paths then take you south west up to the Beacon Batch summit which stands at a height of 325 m (1,066 ft).  There's lovely views over the countryside below including the popular Blagdon Lake and Chew Valley Lake. The summit is also notable as the site of several bronze age round barrows, one of which anchors a concrete trig point. All of the barrows show signs of being opened in the past, but the only recorded excavation was done in 1820.
The route then descends across Black Down which is a moorland area, with its steeper slopes covered in bracken and its flatter summit in heather. During World War II a bombing decoy town was constructed on Black Down, which was intended to represent the blazing lights of a town which had omitted to follow black-out regulations.
The descent takes you north west to Hill Farm where you pick up the Limestone Way. Follow it east and you will soon come to Read's Cavern where traces of Iron Age occupation have been found. You continue east past a series of other limestone caves before returning to the car park.
To continue your walking in the area you could explore Burrington Combe. The carboniferous limestone gorge has lots of fascinating rock formations to see. There's also some nice woodland trails in Rowberrow Warren and an Iron Age Hillfort to see at nearby Dolebury Warren.

Head to nearby Blagdon village where you will find a number of nice pubs for refreshments after your walk. The New Inn (Postcode BS40 7SB) is a classic rural inn overlooking a fishing lake, serving real ales and pub grub with leafy beer garden. The Queen Anne and Seymour Arms are also great options.

On Beacon Batch. The view north is dominated by Blagdon Lake which supplies Bristol 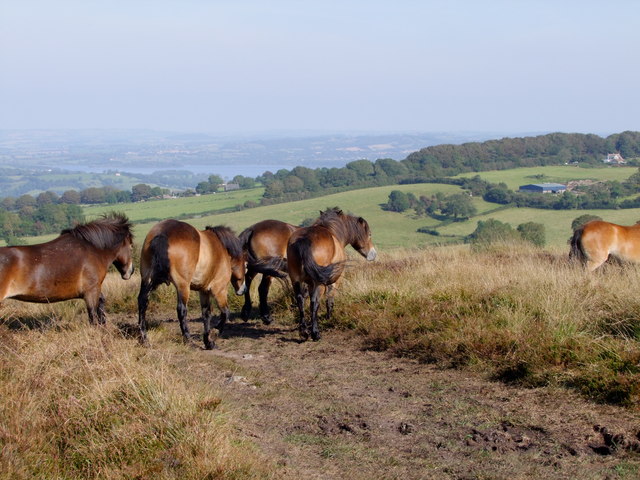 Horses on Beacon Batch with Chew Valley Lake in the background

Looking west from the trig point on Beacon Batch