This circular walk visit the Bennerley Viaduct, a now disused railway viaduct spanning the Erewash Valley between Awsworth and Ilkeston. The route runs for about 3.5 miles with nice waterside sections along the Erewash Canal and the River Erewash. It's a fairly flat, easy walk, taking place on mostly waymarked public footpaths.
The walk starts from Ilkeston Train Station on the Erewash Valley Line. Head west from the station and you will soon come to the Erewash Canal which you can follow north toward the viaduct. The viaduct was built between May 1876 and November 1877 and forms part of the Great Northern Railway Derbyshire Extension which was built in part to exploit the coalfields in Derbyshire and Nottinghamshire. Shortly after passing the structure you can pick up footpaths heading east toward Awsworth. Here you can pick up the Erewash Valley Trail, a waymarked long distance trail.
This will take you south along the River Erewash towards Cossall Common and Cossal Marsh. Turn west here and you will soon return to the train station.

Bennerley Viaduct. The viaduct crosses the River Erewash and carried trains until Dr Beeching's axe fell in the 1960s. The wrought iron viaduct was built in 1879 and is now a listed structure.

On Bennerley Viaduct. This fine wrought iron structure is a listed monument. A proposed foot- and cycleway across the Viaduct has not come to fruition, although it is possible to walk across. In the distance is Cotmanhay, a suburb of Ilkeston. 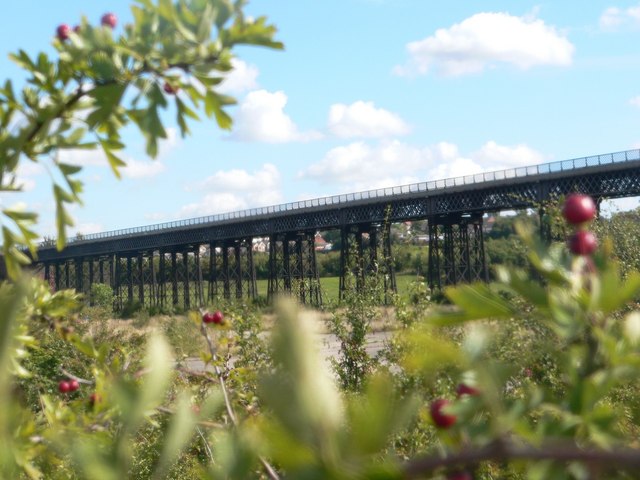 Bennerley Viaduct Bridge. This 1400 feet long, wrought iron bridge was built in 1877 and is one of only two of it's kind in England. It was constructed to carry the Great Northern Railway, over the River Ereash and was closed to traffic in 1973 and is now classed as a Grade II listed building.

Cotmanhay Large council estate on the north of Ilkeston, seen from the embankment of Bennerley Viaduct with Bennerley Fields School in the foreground.