This circular city walk takes you around the highlights of Cambridge, visiting The Backs, a picturesque area where several colleges of the University of Cambridge back on to the River Cam. It's a delightful area for a stroll with magnificent architecture including St John's College, King's College and the fine bridges over the River Cam.
The walk starts from the train station and follows Station Road and Hills Road to Downing College. Founded in 1800, it was the only college to be added to Cambridge University between 1596 and 1869, and is often described as the oldest of the new colleges and the newest of the old. You continue past Peterhouse College to the world famous Mathematical Bridge over the Cam. The Grade II listed wooden bridge was originally built in the 18th century and connects two parts of Queens' College. You can virtually explore this part of the walk using the google street view link below!
The route then passes around Queens' College, one of the oldest and largest colleges of the university, founded in 1448 by Margaret of Anjou (the queen of Henry VI, who founded King's College). It spans both sides of the river and has some of the most recognisable buildings in Cambridge.
The trail then heads aroud the back of King's College, St John's, Trinity, and Trinity Hall. King's was founded in 1441 by Henry VI, soon after he had founded its sister college in Eton.  It is regarded as one of the greatest examples of late Gothic English architecture and includes a 13th century chapel with splendid stained-glass windows.
The route then crosses the Cam, passing Trinity Lane and Bridge Street before coming to Magdalene College. Founded in 1428 the college's old buildings are representative of the growth from a monks' foundation into a centre of education.
After heading around the back of Magdalene the route crosses Jesus Green where there is a lido. It is one of the few remaining examples of the lidos built across the country in the 1920s.
After passing through the park you head around Jesus College. The college was established in the late 15th century and includes expansive grounds. Notable alumni include Thomas Cranmer, Samuel Taylor Coleridge, Lord Reid, Lord Toulson, Sir Rupert Jackson, Sir David Hare, Sir Roger Scruton, and Nick Hornby.
The final section takes you past Christ's Pieces and through Parker's Piece parks. Christ's Pieces is a pretty Victorian park with flower beds and ornamental trees. Parker's Piece is a 25 acre park now regarded as the birthplace of the rules of Association Football. From here it is a short stroll back to the train station and the finish point.
To extend your walking in the area try the Cambridge to Grantchester Walk. The delightful riverside walk starts in the city centre and takes you to the pretty village of Grantchester.
The last mile of this walk makes use of the Fen Rivers Way long distance trail. At Jesus Green you have the option of picking up the trail and following it along the Cam to the nearby Milton Country Park. It's about 2 miles to the north and includes nice trails around several pretty lakes.
The long distance Harcamlow Way also passes through the city. You could pick this up and head north east towards Lode and visit Anglesey Abbey. The National Trust site includes 114 acres of beautiful gardens surrounding a Jacobean mansion.
To the south of the city you will find Wandlebury Country Park in the Gog Magog Hills. This is another excellent area for walking near the city.

Head a few miles south of the city and you could visit the nearby village of Haslingfield. Here you'll find pleasant walks along the River Rhee, rows of quaint thatched cottages, a church dating back to the 12th century and a noteworthy Tudor Manor House where Queen Elizabeth I stayed during the 16th century.
To the west is the new settlement of Cambourne. There's some pleasant walks around this modern village with a lovely local nature reserve to explore. The wildlife rich reserve includes pretty lakes, wildflower meadows and wetland areas. On the walk you can also visit the ancient Bourn Windmill, the oldest surviving windmill in the United Kingdom.

River Cam from The Backs 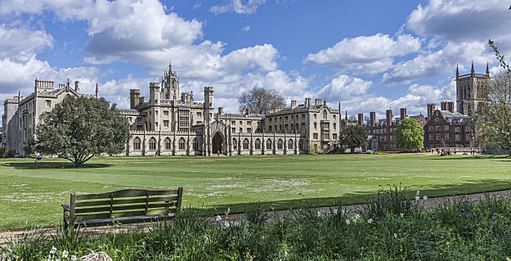