This walk follows pubic footpaths through Cressbrook Dale Nature Reserve in the Derbyshire Dales.
The walk starts in the village of Cressbrook which sits at the southern end of the Dale. From here you can follow footpaths north towards Tansley Dale. In the dale there's attractive woodland, streams and interesting flora and fauna. Also look out for early purple orchids and an interesting limestone dome, known as Peter's Stone, due to its shape resembling the basilica of St Peter's in Rome. It's also known as Gibbet Rock as it was the site of the last ever Gibbeting in Derbyshire. The sinister gibbet was a device from which the bodies of criminals were formerly hung in chains and left suspended after execution, their bones would eventually rattle against the iron cage serving as a deterrent to other would be criminals.
This walk goes as far as Tansley Dale before turning round and returning to the village but you could keep following the footpaths north to Litton or Wardlow Mires where there is a cafe for refreshments.
To continue your walking pick up the Monsal Trail which runs through the village. You can then follow riverside paths east along the River Wye to Monsal Head and the nearby Headstone Viaduct. Just to the west of Cressbrook is the delightful Miller's Dale. This popular beauty spot includes shady wooded valleys, rushing rivers and lots of interesting flora and fauna.

Just to the east is the worthy village of Great Longstone. The historic village includes a 13th century church and a fine 17th century pub. Our circular walk from the village climbs to the splendid limestone ridge at Longstone Edge, just to the north of the settlement.
For more walking ideas in the area see the White Peak Walks page.

A view of Cressbrook Dale, not far from the more famous Monsal Dale. 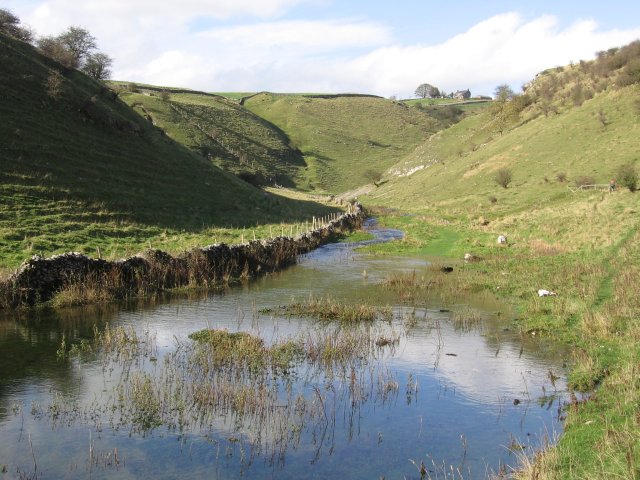 Cressbrook Dale Stream. During much of the year this part of the valley is dry. But at times, the stream which usually appears only further down the dale, flows its full length. On the day of this photograph, there were a number of camera-shy ducks swimming happily about.

View from a bench in the dale

Peter's Stone, Cressbrook Dale. A limestone dome which is known as Peter's Stone, due to its shape resembling the basilica of St Peter's in Rome. Its other name is Gibbet Rock.