This pretty village in Derbyshire is known as the location for the setting for the ITV series Peak Practice and the Crich Tramway Village. This circular walk from Crich visits some of the highlights of the area including the Cromford Canal, the River Derwent, the viewpoint at Crich Cliff and the splendid Crich Tramway Village.
The walk starts in the centre of the village and heads west past Chasecliff Farm to the Cromford Canal. You head north along the canal which runs along the River Derwent and the Derwent Valley Heritage Way. This part of the walk passes Whatstandwell where there is a train station which provides access to the route.
Near Gregory Dam you leave the canal and head east through Leashaw Wood toward Wakebridge. The path then heads around Cliff Quarry before coming to Crich Cliff where there is a noteworthy memorial to the Sherwood Foresters regiment who died in battle, particularly in World War I. You can climb to the top of the memorial tower which stands at a height of 1,000 feet (300 m). From here there are wonderful views over the surrounding countryside to the Humber Bridge and Lincoln Cathedral.
Just to the south of the viewpoint is the popular Tramway Village.  The museum contains over 60 trams built between 1873 and 1982 and is set within a recreated period village containing a working pub, cafe, old-style sweetshop and tram depots.  You can take a ride on a tram which takes you into the local countryside.
After leaving the museum the route heads south along a footpath into Crich.

You could stop off for refreshments in the Tramway Museum at the Red Lion pub. The pub has been rebuilt at the Museum, brick by brick, and is a popular part of the recreated street scene. It's a fine looking place that does good food and has a decent selection of ales. You can find it at the museum just north of the village at a postcode of DE4 5DP.

The area is great for dog walking and there's also some nice woodland trails in Shining Cliff Woods, just to the west of the canal. The Red Lion pub mentioned above also welcomes dogs.

The village is located near to Matlock. You can reach the town on foot by following the Cromford Canal and the River Derwent north. There's lots to do here including the cable car ride at the Heights of Abraham.

Crich Beacon. Located near the memorial tower there are splendid views from this elevated position 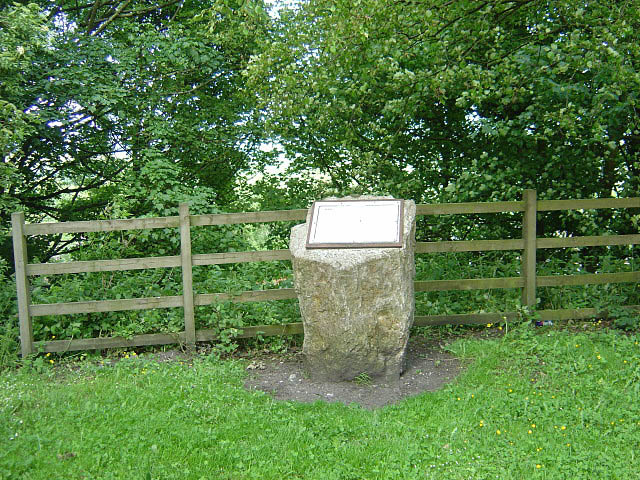 Crich Railways information board. A large boulder has been used as the stand for this information board about the railways which served the quarries in the area. It stands above the mouth of the tunnel under part of the village on George Stephenson's line to Cliff Quarry. This was built as early as 1841 as part of Stephenson's Clay Cross Company venture.

Autumn on the Cromford Canal

The Red Lion at Crich Tramway Museum. The pub was moved from Stoke-on-Trent brick by brick. The Jeeps and Army personnel were there for a Forties Weekend.