This 52 mile walking route runs from Little Vantage to Hawick through some beautiful Scottish Borders countryside. It runs along the old drove road where cattle and sheep were driven through West Linton to Peebles and Traquair, and then on to Hawick via the Yarrow Valley.
The route starts at Little Vantage near Harperrig Reservoir in the Pentland Hills, just south west of Edinburgh.

In Peebles the route links up with the Tweed Valley Railway Path. The shared cycling and walking trail runs from Innerleithen to Peebles along the old railway line.
Hawick is also the start/finish point for the Romans and Reivers Route. This 52 mile route follows the old Roman Roads to the Ae Forest near Moffat. The Borders Abbeys Way can also be linked with here.

Ainville Friesians at Little Vantage near the start of the walk. Beside the Thieves road (Cauldstane Slap) a cultivated field won from the moor. Purple clad Pentlands beyond. This is not such a common sight, there are now half the number of dairy farms in Scotland that there were in 1985.

Information Board on Cross Borders Drove Road The Information board at the point where the drove road from West Linton to Peebles meets the Old Post Road from Eddleston to Peebles. 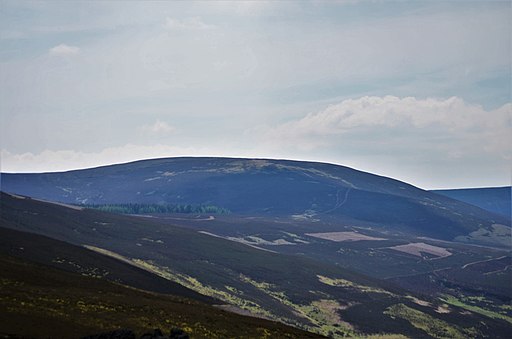 Birkscairn Hill from the Cross Borders Drove Road to the north.

The Drove Road crosses Woo Law Near the crest of a ridge, looking in the direction of Hawick. Tractors not hooves mark the road now.