This walk visits the upper and lower lakes of the beautiful Glendalough Valley in the Wicklow Mountains. The route runs for about 7 miles on good waymarked trails, taking you around both lakes with riverside sections, woodland and a waterfall to enjoy as well.
The walk starts from the Glendalough visitor centre car park where you can pick up the Wicklow Way long distance trail. The trail heads west along the Glenealo River to the Lower Lake and Poulanass Waterfall.  Over time the falls have cut a narrow gorge through the slate rock and borne millions of tonnes of rock, sand and mud into Glendalough, dividing what was originally one lake into the two seen today.
The route then heads to the northern side of the upper lake where you follow the Miner's Lane west. At the west end of the Upper Lake lie the ruins of an abandoned miners' village normally accessible only by foot. The mining of lead took place here from 1850 until about 1957.
After leaving the lake you continue along the Glenealo River until you come to a crossing on your left. This will take you to footpaths climbing above the lake on the southern side of the water. Follow the trails east through the woodland and you will come to the interesting ruins of the Reefert Church on the south eastern shore. The church is located in a peaceful woodland area and dates from the 11th century.
Soon after passing the church your return to the waterfall where you can pick up the Wicklow Way to take you back to the visitor centre.
If you'd like to continue your lakeside walking then you could head north and visit the beautiful Lough Dan. Just to the east you will find Vartry Reservoir where there are nice trails to follow around the two lakes.
Just to the west of the lakes you can pick up trails to take you up to Lugnaquilla, the highest mountain in Ireland. Just to the north is the Wicklow Gap where you can pick up trails to climb Turlough Hill and visit Ireland's only pumped-storage hydroelectricity plant. 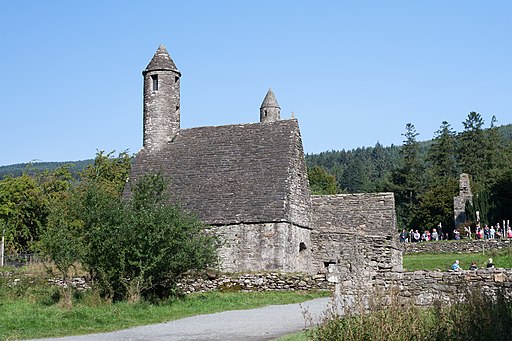 The upper and lower lakes from above