This area of common land in Bromley covers 55 hectares and includes some nice footpaths. You can start the walk from the car park at the south eastern corner off Westerham Road. On the site you'll find woodland, heathland, dry acid grassland and three pretty ponds. There's also lots of interesting flora and fauna to see on the way.
The common once formed part of the Holwood Estate, owned by the 19th century Prime Minister, William Pitt, the younger. Keston is also only two miles from Charles Darwin's home, Down House, and he often visited to study the plants and animals here.
After exploring the common head to the commonside Fox Inn (postcode: BR2 6BQ) for refreshments. There's a nice large beer garden to relax in during the summer months here.
To extend your walk pick up the London Loop and head short distance west to the nearby Hayes Common. There's more nice trails here with woodland and good dog walking opportunities. High Elms Country Park is a little further east along the London Loop trail but still within walking distance of the common. Here you'll find woodlands, a nature centre, ice well, formal gardens and wildflower meadows in a 250 acre space. If you head west along the trail you'll soon come to Addington Hills where there's a nice viewpoint to climb to. The Cudham Circular Walk and the Farnborough Circular Walk also pass through the area.

BR2 6BP - Please note: Postcode may be approximate for some rural locations

Next to the common you'll find the Fox Inn. (postcode: BR2 6BQ). The pub sits next to the common and includes a nice large beer garden to relax in during the summer months. There's also The Greyhound pub here which does a great Sunday Roast and is dog friendly. 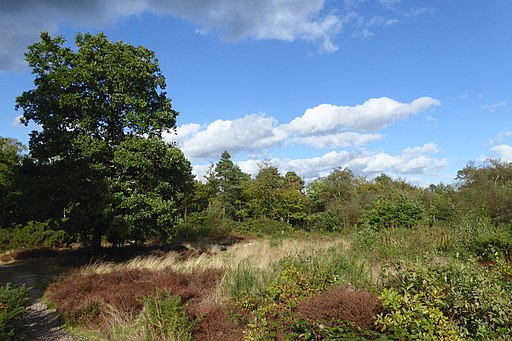 The ditch that is part of a linear earthwork on Keston Common.