The Queen Elizabeth Olympic Park has miles of nice trails on which to explore the expansive venue. It's free to visit every day of the week and includes parkland, waterways, playgrounds and cafes.
Start at the car park at the southern end of the London Stadium and you can pick up paths alongside the stadium and the River Lea. You continue north passing the Copper Box Arena on your left. The arena hosted handball and modern pentathlon in the 2012 Olympics.
The route continues along the river past Alfred's Meadows passing the field hockey and Football 5-a-side pitch which was used at the 2012 Summer Paralympics. Around here you turn right crossing the bridge over the river towards the Lee Valley VeloPark. The facility includes a BMX track and was one of the permanent cycling venues for the 2012 Olympic and Paralympic Games.
After exploring the cycling centre you head south along the Olympic Park Avenue to the waterglades where there are a series of lakes and waterways. Around here you have the option of heading east and visiting East Village. This area was used for the Olympic Village and has been converted for use as a new residential district, complete with independent shops, bars and restaurants.
The final section of the walk takes you around the other side of the London Stadium, passing Stratford Marsh and the London Aquatics Centre where the Synchronized swimming took place. You'll also pass the fantastic ArcelorMittal Orbit. The sculpture is one of the real highlights of the park and Britain's largest piece of public art, standing at 114.5 metres (376 ft). It's also an observation tower allowing visitors to view the whole Olympic Park from two observation platforms.
To extend your walking in the area you can pick up the Lea Valley Walk and follow the river north west to Hackney Marshes. Continuing north will take you to Walthamstow Marshes and the Walthamstow Reservoirs where there are more nice cycling and walking trails.
Just to the west is Victoria Park where there's 200 acres of parkland with lakes and cycle paths.
Several long distance walking trails also pass the park. You could pick up the Capital Ring or the Jubilee Greenway to further explore the area. The Hadleigh to Stratford Legacy Walk also starts/finishes at the park.
The long distance trail runs from the park to Hadleigh in Essex. It was created to celebrate the 2012 Olympic games in London.
You can virtually explore the whole park using the google street view link below! 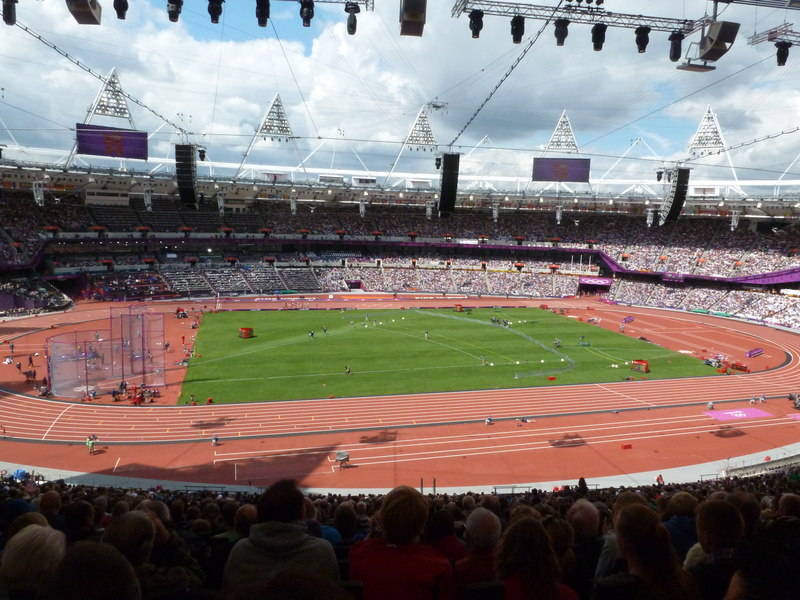 Inside the Olympic Stadium

The Orbit and Olympic Arena at night