Walk to the bridge where where Winnie the Pooh invented the game of Pooh Sticks on this lovely little literary walk in Ashdown Forest.
Start the walk from the Pooh Car Park at Chuck Hatch Lane, TN7 4DN. From here you can pick up woodland trails heading north through Posingford Woods to Pooh Sticks Bridge. It's about a half a mile walk from the car park to the bridge.
The game is first mentioned in the book 'The House at Pooh Corner'. It's a simple game in which each player drops a stick on the upstream side of a bridge and the one whose stick first appears on the downstream side is the winner. The bridge itself was built in 1907 and originally called Posingford Bridge. It's thought to be the location where authour A.A Milne and his son first played the game so is a popular destination for fans of the books.
After playing a game you can also enjoy a stroll around the surrounding woodlands. Head south east and you will soon come to Five Hundred Acre Wood. Hundred Acre Wood in the Pooh stories is based on this area.
Due south of the car park you can try the Ashdown Forest Pooh Walk. The walk visits some more of the locations associated with the books, such as the 'Enchanted Place' and Roo's Sandy Pit. There's also the A.A Milne memorial and fabulous views from the lovely Gills Lap to experience here.
The long distance Wealdway and Vanguard Way also run through the area so you can extend your walking on this waymarked, long ditance trails.

TN7 4DN - Please note: Postcode may be approximate for some rural locations

Head a few miles to the south west and you could pick up the Chelwood Vachery Walk. The peaceful circular route explores an ancient estate which includes the pretty Millbrook Stream and Braberry Hatch Ponds. 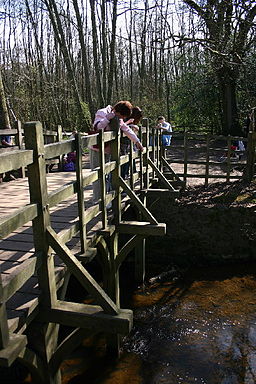 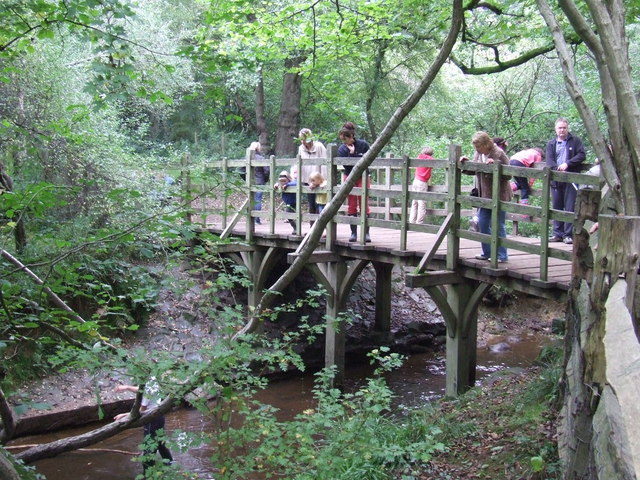 People peer over the bridge to see how their stick is fairing in the race. If you feel as though you are getting to be an accomplished player then there is an annual World Poohsticks Championships held near Witney in Oxfordshire. The championships include single and team events and have attracted over 1,500 visitors, including many from overseas.

Country lane near Hartfield. The path leading to the bridge.