The Cotswolds village of Sapperton has some good trails to follow through the extensive local woodland and attractive Cotswolds countryside. This walk visits the Sapperton Canal Tunnel where there are footpaths along the well known local structure. There's also nice waterside walking along the canal and rivers which run through the area.
The walk starts in the village and heads west to Sapperton Wood and Frampton Wood, before picking up waterside paths along the River Frome to the village of Frampton Mansell. It then turns south east, following the old Sapperton Tunnel and other tracks towards Tarlton. You then pick up the Macmillan Way to take you along the Sapperton Canal Tunnel. With a length of 3,817 yards it was the longest canal tunnel, and the longest tunnel of any kind, in England from 1789 to 181. This section runs through Hailey Wood, before following country lanes back into the village.

At the southern point of this walk you are very close to the Source of the Thames near Kemble. If you have time it's worth a detour from the route to visit the site where you can pick up the Thames Path National Trail.
To extend your walking in the Sapperton area you can pick up the Cotswold Canals long distance trail. You could follow it west along the Thames and Severn Canal to Chalford.
You could also follow the Macmillan Way north east, and explore the Cotswolds Hills.

Head a short distance east from the village and you could explore the expansive Cirencester Park. This park has miles of woodland trails, a large lake, old follies and a deer park.

Footpath through woods, near Frampton Mansell 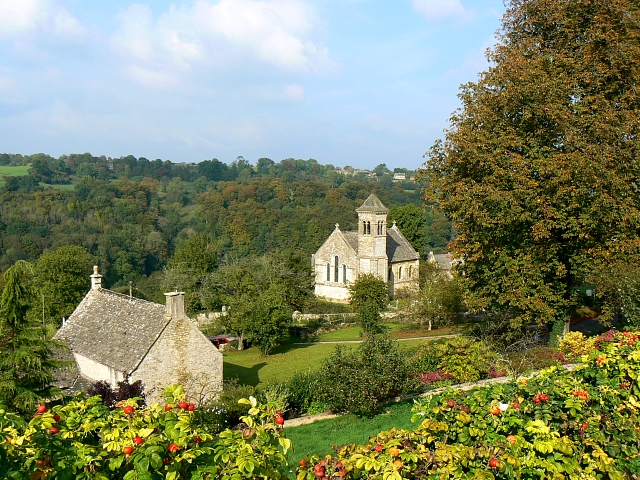