This attractive Somerset based town has a fine 17th century market square and some outstanding architecture to enjoy. The town is notable as having given its name to the county. It was around the start of the 14th century, the county town of Somerset. For walkers there's some lovely country footpaths to explore the surrounding area and pleasant waterside trails along the River Cary to the north of the town.
This walk from Somerton takes you to one of the highlights of the area at Lytes Cary. You'll also visit the neighbouring villages of Kingsdon, Charlton Adam and Charlton Mackrell.
The walk starts in the town and heads east along the Macmillan Way West to Somerton Erleigh and Somerton Wood before passing through Kingsdon Wood. Here you head south to enter the village of Kingsdon.
From the village you can follow country lanes to Lytes Cary. This National Trust owned manor house includes lovely grounds with beautiful gardens, attractive topiary, ponds and ornate statues.
After exploring the house you head north to Charlton Adam where you pick up the Macmillan Way West again. You can follow the waymarked footpath west past Charlton Mackrell before returning to Somerton.

On the route you could stop off at the Kingsdon Inn. The picturesque thatched pub has a 300 year old history and fine menu. There's a charming interior with a cosy fire for colder days. Outside there's a lovely garden area to relax in during the summer months. You can find them at a postcode of TA11 7LG for your sat navs.

The country and woodland trails on the route make for a fine dog walk. The Kingsdon Inn mentioned above is also dog friendly.

To continue your walking in the area you could follow a public footpath north from the town centre to the River Cary and the Somerton viaduct.
You could also follow the Macmillan Way West south west to visit Long Sutton. Near here you can pick up a river trail heading west along the River Yeo into neighbouring Langport. Here you can pick up the circular Langport Walk which follows the River Parret Trail to the historic ruins of Muchelney Abbey. The abbey is run by English Heritage and has a fascinating history having once been a wealthy Benedictine house and the second oldest religious foundation in Somerset. The River Parret trail can also be followed west to the noteworthy Burrow Mump. Here you'll find the striking 18th century ruined church of St Michael's, another highlight of the area.
Just to the north you'll find the neighbouring village of Compton Dundon where you can try the Compton Dundon and Combe Hill Wood Walk. The circular walk includes a climb to Iron Age Hillfort on Dundon Beacon and a visit to the Hood Monument, which is something of a local landmark. You can also pick up the Polden Way and further explore the Polden Hills here.
For more walking ideas in the area see the Somerset Walks page.

Market Cross, Somerton. Grade II. Rebuilt 1673. It is said that there has been a cross on this site since at least 1390.

Somerton: towards Market Square. A view from near the White Hart Inn, with the market cross beyond the red Ford 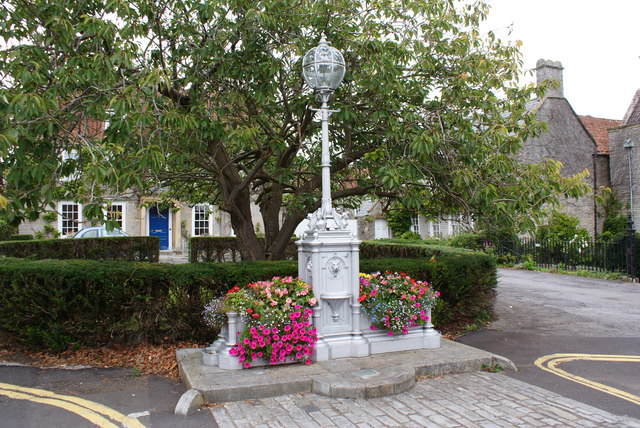 Drinking trough in Cow Square, Somerton. This trough and fountain was refurbished for the millennium.

Garden and house at Lytes Cary Manor. September view of flower borders with house beyond.

River Cary. The river looking upstream from Cary Bridge on the B3151 just outside Somerton.