This is the complete route for Sustrans Route 45 of the National Cycle Network. The route is also known as the Mercian Way and runs from Chester to Salisbury through Shropshire and Worcestershire.
Scroll down for the full gpx file and route videos.
The first section runs from Chester to Whitchurch, passing the Shropshire Union Canal, Peckforton Castle and Peckforton Hills, Bickerton Hill and Maiden Castle and the lovely Comber Mere on the way.
The next runs to the historic town of Shrewsbury passing Moreton Corbet Castle and Haughmond Hill as you go.
You continue past the iconic Wrekin hill before heading to the towns of Telford and Bridgnorth. Near here you'll pass the pretty Chelmarsh Reservoir and enjoy a riverside stretch through Severn Valley Country Park.
The route continues south to the woodland trails in the Wyre Forest near the towns of Kidderminster, Bewdley and Stourport.
The route goes on to visit Droitwich Spa, Worcester,Tewkesbury and Gloucester. You then head through the Cotswolds, passing Stroud, Minchinhampton, the Source of the Thames near Kemble, Cirencester, South Cerney, Cricklade and the Cotswold Water Park where there's a series of lakes to cycle around.
The next stage runs through Swindon passing Coate Water Country Park, Barbury Castle Country Park and the fascinating Avebury Stones.
The final section runs through Pewsey and Amesbury before finishing in Salisbury where there's a famous cathedral and the nearby Stonehenge to visit. 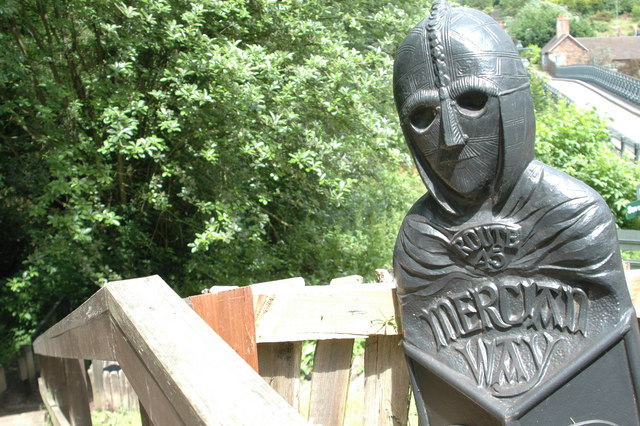 Forestry road, Wyre Forest. The road is used by authorised motor vehicles, mainly in connection with the forestry operations going on in this part of the forest.

Wrekin View from the trail.

Cyclepath, Stratford sub Castle. A little oddly, this is a public footpath followed by NCN cyclepath 45, but it has obviously been designated as "dual use". NCN45 seems to share with the A45 a prodigious cross-country route. Here it passes a paddock as it approaches Stratford Road. The houses are on Castle Keep (the name of a modern close).

Cycle route 45, M&SWJR trackbed, Swindon. The Midland and South Western Junction Railway ran along this track from the 19th century until the 1970s. Although the line closed to passenger traffic in 1961 this section, which ran from Rushey Platt to Swindon Old Town , remained open for freight traffic shipping materials for the construction of the M4 motorway in the early 1970s. It is now part of the National Cycle Network. The path leading down to the left provides access to a restored section of the Wilts and Berks Canal.

Gloucester and Sharpness Canal Two Mile Bend. The canal runs parallel to the Bristol Road out of Gloucester in this square before executing a sharp "S" bend to the left of the photographer. The excavations visible on the other side of the canal are to straighten out this sharp bend, unfortunately not led by the needs of the sea going ships which have used this canal, but instead to gain the necessary clearances to build a new western road bypass for Gloucester!